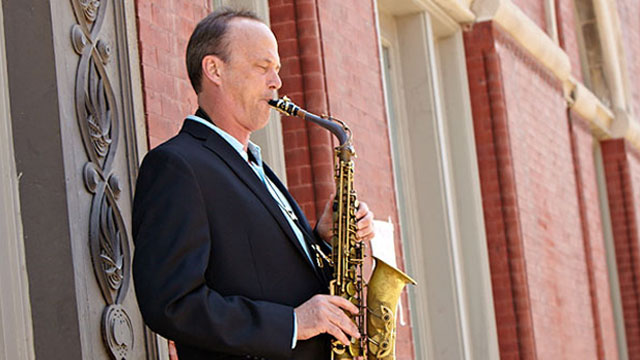 Try recalling the playing of alto saxophonist, David Bixler and chances are the first reaction may be “David who…?” Of course this would show some ignorance, but then Mr. Bixler plays so much in the tradition that he could almost pass without being easily recalled, but that would be almost too fallacious as Mr. Bixler is first and foremost a composer who also plays alto saxophone. In fact it might soon be easy to recognise Mr. Bixler from the remarkable music that he writes; something that, like Wayne Shorter, instantly becomes a worthy addition to the literature of modern music. Such is the audacity of his compositions that Mr. Bixler ought to receive recognition as a composer first and an instrumentalist second. However, this suggestion is fraught with its own problems when listening to Mr. Bixler playing his music on The Next Exit May be Inside Your Head. Now there is a real problem here because Mr. Bixler seems to add not only to the literature of music, but with his short, pithy solos, to add to the language of the music itself. 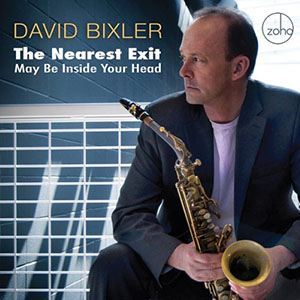 David Bixler is not one of those instrumentalists who get up close and personal. His play is somewhat detached, very intellectual and cerebral. To make an impression Mr. Bixler’s music makes its insidious way into the head. The compositions are audacious; first of all the melodic lines are angular, sometimes veering so sharply away from suggested liner movement as to make acute turns off suggested ideas almost as soon as they are suggested or stated. This makes the architecture of the songs extremely interesting. The music leaps from plane to fractured plane, drawing musical lines that are unique and almost always unexpected. Each song has an edifice that is so improbable that were the music a series of melodic building blocks piled one on top of the other, they might be in a constant state of movement, seemingly teeter-tottering, on the verge of breaking apart and/or morphing into another radically different shape. The glue that helps them stay in the pocket, so to speak, is the equally radical nature of Mr. Bixler’s harmonic conceptions. He mixes colours as a painter who would mix shades and media thus creating a harmonic palette of variable viscosities. Clearly Mr. Bixler has learned his lessons from listening carefully to Wayne Shorter. But his is also a singular voice full of wonderful light and dark colours, lit by ponderous thoughts and ideas.

The very suggestion that the inside of the head is a network of grand trunk routes is so wild and audacious that it seems it could only come from Mr. Bixler. And indeed, the musicians do not let him down in any way. Following the wondrous rhythm of Mr. Bixler’s Chaplinesque walking solo, is the extraordinary guitarist John Hart. Mr. Hart is one of the main reasons why Mr. Bixler’s record is a dramatic masterpiece. The guitarist wields a palette that features harmonic colours and tonal textures that come close to suggesting a truly magnificent surrealist musical canvas that Mr. Bixler seems to have intended it to be. The other character in this remarkable dramatis personae is bassist Ugonna Okegwo, a musician who is known for his superb sense of harmony. Playing with great elegance and sophistication Mr. Okegwo launches sublime harmonic strokes at the musical canvas that Mr. Bixler presides over like an old school saxophonist masquerading as a director directing the players to paint their respective colours on the musical mural that he is facilitating. “Arise” is one of those songs where Mr. Okegwo excels.

Of course, Mr. Bixler’s alter ego remains Scott Wendholdt, who builds his contrapuntal textures with wondrous élan. This is a partnership that recalls some of the most enduring saxophone/trumpet relationships in modern music. Both Mr. Bixler and Mr. Wendholdt seem to know each other’s minds deeply and this is shown in the great extra sensory perception that is displayed in songs such as “thinking Cap” and “Perfected Surfaces”. The set would not be as rhythmically exciting without drummer Andy Watson, who is a shadowy figure throughout, but certainly anchors the pulsating rhythm of this memorable record.

David Bixler on the Web: www.davidbixler.com