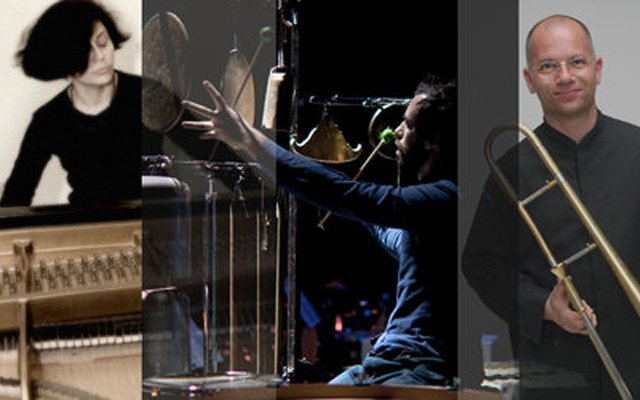 Free improvised trio music has never sounded so fascinating before as a result of the striking inventions that – first and foremost – arise of the unusual step of putting a trombone together with a piano and then throwing a vibraphone and almost ghostly percussion in the mix. Hildegard Kleeb, Roland Dahinden and Alexandre Babel’s simply entitled Lines appears to not only create the starting point of the melodic line, but by infusing that point itself with uncommon energy the musicians are consumed by a force that impels them on an endless adventure. Magically, it would seem, the musicians both know – and don’t know – where the music will take them, but trusting their instincts as well as the truth of music itself, they follow, create, shape and sculpt music that in turn sculpts, shapes, creates and guides them along its loping, elliptical, circular and, often even, squiggly path. 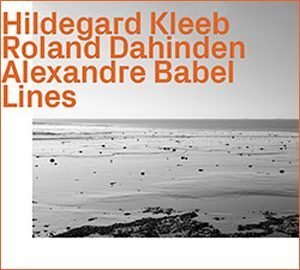 The music of Lines exemplifies the creative process of musicians who combine uncompromisingly questing intelligence and intuition with a real consciousness of their place within music’s seemingly accelerating continuum. The ten works recorded here seems to pay sly and almost mysterious and unwitting homage not only to musicians (as the notes also suggest) from Bill Evans to Morton Feldman but seem also to evoke others from Anton Webern to Gérard Grisey. But while all of this may be in the background of the soundscape, in the foreground is very much of Miss Kleeb, Mr Dahinden and Mr Babel’s own singular and combined mental landscapes. This is clear from the first piece on through the three-quarters of an hour assemblage of smooth and splintered, scurrying episodes and charged silences.

These are delicate melodic fragments with breathtaking harmonic and rhythmic components woven into their gossamer-like musical and pictorial fabric. They are elegiac and often cheerfully narrative sketches that breathe and ebb and flow gently as in “Primroses and Snow”, or overflow with a surfeit of gliding momentum in “Riding on a Leaf”. But mostly they are extended reflections (of and) on the nature path that The Line may take in both its predictable and magically surprising journey. Some are constructed around the bright tinkling of the piano keys redolent of heavily felted hammers on strings; or on the strings themselves, now plucked or strummed by fingers of Miss Kleeb. Other lines are laden with glimmering vibraphone or some shimmering percussion from Mr Babel; and almost all of them presided upon by the elegiac or exuberant questing of Mr Dahinden’s trombone. It’s an unflaggingly engaging two sets of music to absolutely die for…