American pianist Andrew Oliver and British reeds and woodwinds player David Horniblow have been heard together recently as part of The Dime Notes, a group dedicated to playing in the tradition of Jazz; playing music that is specifically dedicated to preserving the New Orleans style. In fact Mr Oliver is a pianist almost completely immersed in the New Orleans style of playing, a relative rarity these days. For his part Mr Horniblow is no less immersed in that style of playing and indeed his playing often evokes the high and lonesome clarinet of George Lewis and Barney Bigard. So it seemed almost a foregone conclusion that the two musicians would get together to traverse that time when the style of playing was most prominent – at the turn of the 20th century, that is. 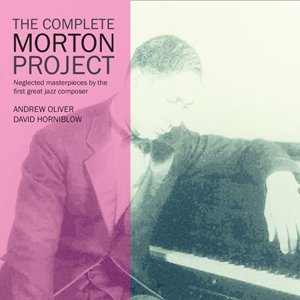 The welcome surprise is that the duo should make their journey one that uncovers hidden, rarely played and perhaps even lost compositions by the great Jelly Roll Morton. A “surprise” but also something that is crying out to be heard, not only because it would appear that there is a contemporary trend in music to play improvised music and pass it off as Jazz. Musicians are just as guilty of doing so as are music industry executives with precious little knowledge of the history of Jazz. The result is a burgeoning music industry that tries to pass itself off as something that it isn’t; in this case – “Jazz”. On the flip-side, when a recording as masterful as this one comes around, one should be at the ready to recognize its importance, its authenticity and its remarkable beauty.

Jelly Roll Morton was a seminal figure who ruled the roost, so to speak, when Jazz was young, even going so far as to claim that he invented the art of Jazz. Truth be told, he was responsible for a number of “firsts” including recognising the importance of “the music ensemble” and writing idiomatically for the several instruments that made up this (then) so-called Jass “ensemble”. He was also the first to make the connection between classical forms, the Blues, and was almost alone in bringing Spanish traditional forms from Afro-Caribbean music into Jazz – or what he now-famously called “the Spanish tinge”. Best of all, Mr Morton brought together Black American music – the Blues – together with European forms; perhaps even create the first Jazz composition.

Mr Oliver and Mr Horniblow have done remarkable work in transcribing some of Mr Morton’s all-but-forgotten; even so-called “lost” work in this breathtaking hour-long disc. But more than reminding us where the music of Jazz comes from, this disc creates the vivid soundtrack for what is almost a period narrative using the rarest of rare material. The duo operates as a partnership of equals and supplies the ear-worms throughout. Mr Morton’s compositions are, of course, the main attraction – dancing melodies, insistent rhythms and breathtaking harmonies with the added attraction of breathtaking harmonies tossed from pianist to reeds/woodwind player and back in a devilishly brilliant manner.

The music of Jelly Roll Morton is proudly flown as the flag of the seminal music of Jazz throughout. But even if the music is the main attraction one cannot help being struck by the invention of each of the musicians playing here; Mr Oliver, for his part maintains swagger and swing through each interpretation holding fort especially in the long inventions of “Jungle Blues”, for instance. Mr Horniblow, for his part, plays clarinet and bass clarinet – as well as the lugubrious bass saxophone played here with tremulous delicacy on “Mr Jelly Lord” – with lithe and elegant warmth and swing weaving the tantalizing symmetry of Mr Morton’s melodic lines masterfully into the grand scheme of the songs. Both performers negotiate Mr Morton’s diabolical music with expertise, eloquence and good taste that is both rare and welcome music today in this worthy tribute to one of the great pillars of Jazz – Jelly Roll Morton.