Anyone who thinks that pulling off one brilliant recording as Lucas Dann did with Ugly Beauty can now think again because Mr Dann has just outdone himself with this absolutely masterful follow-up, Serious Music. Not only did Mr Dann seem to arrive at a remarkable understanding of Thelonious Monk’s ingenious harmonic conceptions and – even better than that – seeming to penetrate His Royal Outness’ bottomless well of emotions, but seemed to make other musicians several times his age sounded like fools rushing in. And that takes more than having the proverbial BIG ears that musicians die to be born with; it takes altogether uncommon wisdom.

It would appear that Mr Dann has brought all of that wisdom to Serious Music where he and two young musicians from the Netherlands – the bassist Tijs Klaasen and drummer Wouter Kühne seem to have written a new script for trio music. If anyone old enough to remember, this album along with Mr Dann’s recent Monk album with the Finnish voice artist Kadi Vija make a wonderful companion to Chick Corea’s Trio Music (ECM, 19182)] 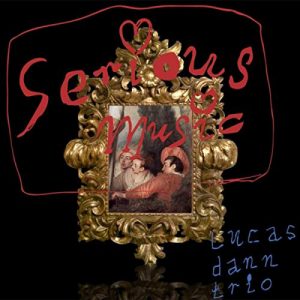 which was that trio of Mr Corea, Miroslav Vitous and Roy Haynes’ follow-up to Now He Sings, Now He Sobs (Solid State, 1968). There is more than just extraordinary music in Mr Dann’s two discs to merit putting them alongside Mr Corea’s.

Like Mr Corea’s recordings Mr Dann’s trio recording is a benchmark one. In Mr Corea’s case he re-wrote trio music – literally altered the whole dynamic between corresponding members of the group by changing the language of communication. In the six songs of Serious Music Mr Dann does something similar. But he also seems to have taken an enormously difficult path to get there. It would seem that Mr Dann has slowed down the course of the music on the disc so that the whole recording begins to resemble like a long and interminable ballad. For not only is every song played as if the music were in near-suspended animation but there are parts of the recording – even in Mr Monk’s “Bemsha Swing”, in “Leroy Larou” and most certainly in “Ugly Beauty” where the notes played by pianist, contrabassist and drummer seem to leap and pirouette as if suspended in the air.

To attempt music – a whole album of it – at elegiac-balladic speed is one thing but to pull it off is quite a tall order. Here’s why: for a pianist, it means having to play large swathes of a score with dynamics that follow pianissimo instruction. Depression of the keys have to be interminably slow; so slow that even the heavily felted hammers of the instrument should suggest a kiss of the strings. Even if you add a prolonged sustaining pedal to the music it is diabolically difficult to make music sound as if it is made from yards of gossamer-soft fabric. Now, add contrabass (played almost completely pizzicato by Mr Klaasen and the proverbially thunderous drums by Mr Kühne and you can imagine just how accomplished this album really is. Better still, why not listen for yourself.