Home Music Fred Hersch: Open Book
Is this a glimpse into the fascinating heart and mind of Fred Hersch as suggested by its title: Open Book? Perhaps not because Mr Hersch pours his life out in all of his music, crying tears of joy and laughter and sadness and forgetting to anyone who will listen. And surely there are now hundreds of thousands hanging on to his every note, as so we should be as Fred Hersch, Pied Piper of Art that he is, leads us through the proverbial forest (on the cover of this CD) to an equally proverbial Land of Hope and Glory.

What fires up Fred Hersch; what propels his art of pianism when he wakes up each morning? We know that it is the music of the Gods of Valhalla: from Thelonious Monk to Antonio Carlos Jobim. But there always is something new to ponder after listening to this Mr Hersch’s CD Open Book as well. He quietly slips one chart by Benny Golson – perhaps the composer and saxophonist’s most famous – the one so aptly called “Whisper Not” into the second spot on this set-list, right before the ubiquitous Antonio Carlos Jobim number and the penultimate Thelonious Monk one, “Eronel”. 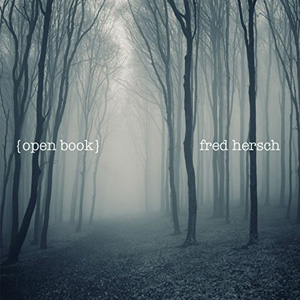 In the midst of it all is “Through the Forest”, a Cecil Taylor-like adventure transformed and extended by Mr Hersch into something with a greater emotional range and epic nobility as it proceeds from darkness to light.

And then the album closes with an absolutely gorgeous version of Billy Joel’s “And So It Goes”, the latter as if to suggest in a real and figurative sense that there is much more to come. This is the year that Fred Hersch has designed to be his own bursting forth through a new door; one through which he emerges baring his soul in words and music. His autobiography, Good Things Happen Slowly, an equal-parts eloquent and viscerally exciting journey of discovery of his own music and humanity reviewed elsewhere in these pages. This, of course follows somewhat close on the heels of the release on DVD of the operatic My Coma Dreams, the sublime music and vivid drama of which plumbs the depths of an HIV-driven coma with lyric tenderness and tumultuous energy with uncommon bravery.

However, as always, Fred Hersch leads the way with his elegant music and Open Book allows him to do so in a special way, in a solo performance at the JCC ART Center Concert Hall in Seoul, South Korea – a sort of endlessly domed studio. Fred Hersch plays these pieces like a man inspired with such presence and seriousness that every moment sounds carefully weighed up. Yet there is no sense of calculation or strain, and it would be hard to find playing of greater immediacy. The high-point, of course is “Through The Forest” from its fearful opening to the rapt tenderness of its closing. This is truly music, if you will, that tells the story of Mr Hersch’s life from its “scary” beginning to the present time. It is also music we must take as we continue on the journey to fill our own life’s “open Book”.

Track list – The Orb; Whisper Not; Zingaro; Through the Forest; Plainsong; Eronel; And So It Goes