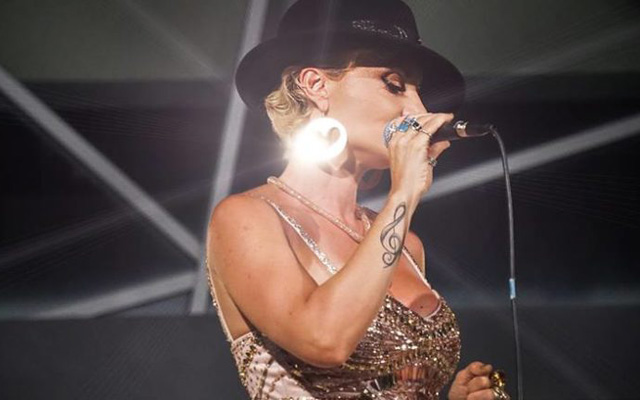 Sometimes it pays not to over-think vocal ‘pitch’; one can be very wrong especially when listening to Mari Nobre on Live and Alive and by the time one gets to the tricky Victor Young and Edward Heyman song “When I Fall In Love” one feels foolish. Miss Nobre is pitch-perfect as she dives into the depths of – and hangs onto the low notes at the end of the ‘A’ lines and then magnificent on notes that close out ‘B’ lines in the piece. Then going back to the beginning it is refreshing to discover that although Mari Nobre might come across as an opera seria – which she probably is – ‘pitchiness’ is just a matter of vocalastic style, something that you grow to admire, simply because it takes courage to get on stage and let songs speak to you in their own special way.

Let’s also not forget that Mari Nobre is a red-blooded Italian, passionate about singing and also about telling it like it is – in life and in music. Now, this album becomes very precious as it touches raw nerves especially with its Brasilian fare. To Antonio Carlos Jobim, Vinicius de Moraes, Chico Buarque and every Brasilian who sings their songs – and hangs on to their every word – it’s all about dealing with emotions. Technique is bent, twisted and curved to suit the weight of emotion as it reaches critical mass. 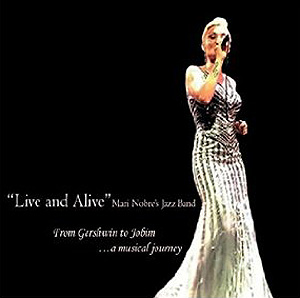 Thus, in “Chega de Saudade”, “Corcovado” and especially in the stark melancholia of “Retrato em branco e preto” you hear Mari Nobre reaching into the heart and turning it inside out so it now palpitates at double the rate.

There are a few surprises on Live and Alive. First: Mari Nobre bills it as a musical journey “From Gershwin to Jobim” but then proceeds to end the Gershwin part after just one song. A pity, since she does a fine job of “Fascinating Rhythm”. Second: Benny Golson’s “Whisper Not” is in the mix and it’s certainly a surprise to find Mr Golson’s genius being acknowledged by vocalists time and again. But then again: “It’s about time that a new generation of musicians did”. Third: “Linda” is a gorgeous piece and the surprise here is discovering that Miss Nobre wrote it; so why is there not more music by her on this album? And fourth: “Frenesi” sung has not sounded this good since another foreigner, Linda Ronstadt, sang it on her eponymously entitled album with a big band whose members read like a who’s-who in music.

Naturally the joy of listening to all of the music here increases exponentially because of the members of the ensemble – every one of them to a man. And then there is the Leonard Cohen piece, “Dance Me to the End of Love”, tucked away where you almost won’t find it…? What a wonderful way to discover – or rediscover – all of this music through the heart of Mari Nobre.