Home Music Frank Kimbrough: Solstice
Everytime that the pianist Frank Kimbrough sits down to play he makes a habit of raising the bar of musicianship. With Solstice he has raised it yet again; far heavenward this time, and although bassist Jay Anderson and drummer Jeff Hirshfield have help him get it there it is all more wonderful by the guiding hand of Maryanne de Prophetis whose music has navigated the stars long before Kimbrough’s. “Solstice” is a prime example of this.

De Prophetis is more than a musician. She is a visionary. Music appears to in apparitions whispering its melodies to her heart. You absolutely don’t write songs like “Solstice” by simply brushing up on your idioms and metaphors. The sun and the moon and the planets speak to you as they did to the Africans for how else would the Nubians known of solstices and equinoxes and written about them a very, very long time before the Indians, Chinese and the Greeks? How sad, then, that it is Cleomedes whom we quote to define: The band of the zōdiakos kuklos is at a loksos because it is positioned between the tropical and equinoctial circles touching each of the tropical circles at one point … 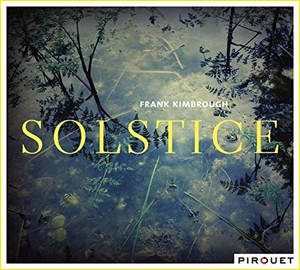 This Zodiac has a determinable width (set at 8° today) … that is why it is described by three circles: the central one is called “heliacal” (hēliakos, “of the sun”).

The term heliacal circle is used for the ecliptic, which is in the center of the zodiacal circle, conceived as a band including the noted constellations named on mythical themes. Other authors use Zodiac to mean ecliptic, which first appears in a gloss of an unknown author in a passage of Cleomedes where he is explaining that the Moon is in the zodiacal circle as well and periodically crosses the path of the Sun. As some of these crossings have come to represent eclipses of the Moon, the path of the Sun is given a synonym, the ekleiptikos (kuklos) from ekleipsis. Is such a background necessary? All the better to enjoy the glorious, interminable ellipses of Maryanne de Prophetis’ piece, and the other pieces by Carla Bley, Annette Peacock, George Gershwin, Paul Motion, Andrew Hill, Maria Schneider and, of course the spectacular music and musicianship of Frank Kimbrough.

Like Maryanne de Prophetis, the music whispers to Kimbrough’s heart; its rhythms ricochet around his head and those zōdiakos kuklos positioned between the tropical and equinoctial circles touching each, the circles this time but every nerve in Kimbrough’s fingers, creating ripples in the sinews of his arms, to make them (the fingers) caress the keys as they dance across the piano. Everything is sung and shaped from there: “Seven” becomes more slender making an appearance infinitely more perfect that the perfect prime number that it is. “Here Come The Honey Man” is more Porgy and Bess’ than Gershwin’s. “The Sunflower” explodes between the fingers of its celestial gardener; Annette Peacock’s music, like Andrew Hill’s, is attired anew.

Only “Solstice” by De Prophetis and “Walking by Flashlight” by Maria Schneider remains solitarily the property of their creators’. Kimbrough can seemingly do nothing to change them and it’s just as well that he doesn’t even try: “For what doth it profit a man, if he gain the whole world, and suffer the loss of his own soul?” said Christ to his disciples, which is recorded by Matthew 16:26 (Douay-Rheims 1899 American Edition (DRA). It’s also how Frank Kimbrough sees the world, perhaps, which is why the songs in question, by De Prophetis and Schneider are played without any interference whatsoever from ego but in the same naked, shimmering beauty that their creators gave to them. And this is also why Frank Kimbrough, once a novitiate, is now turning into a visionary just like De Prophetis and how he has, together with Jay Anderson and Jeff Hirshfield crafted for us, an album to absolutely die for.