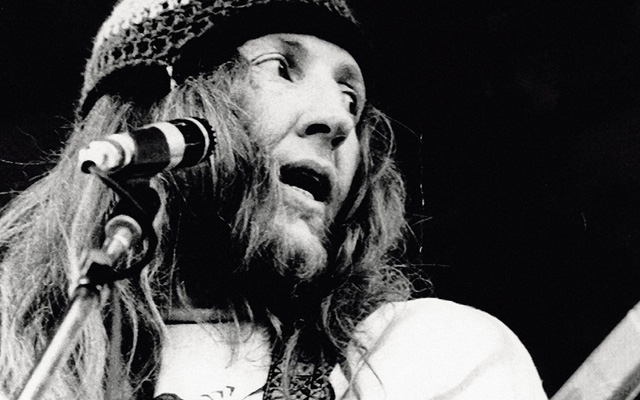 With a restless musical legacy that spans more than four decades, the wiry, snaggle-toothed Aussie polymath Daevid Allen is one of the most under-appreciated heroes of 20th century counter culture. Nina Simone said he was the only white guy whose psychedelia she could stomach. David Bowie claimed he invented glam rock. He bamboozled London’s hipsters with a bracing amalgam of jazz and absurdist poetry recitals way back in 1963 and the BBC Radiophonic Workshop commissioned him to compose a berserk, tape-looped sound collage when the Beatles were still teeny-bopping their way up the charts.

As the brain behind Gong and Soft Machine, Daevid Allen crafted some of the world’s most pioneering space-rock.

“A lot of ideas have come through with me,” muses the 69-year-old between gulps of ale at a north London pub. “You can’t ever own ideas, but you can tune in and be aware of them, some of us just sniff them in the breeze earlier than others. You maybe get a bit of credit but you don’t really get any of the spoils – by the time they become popular, you’ve lost interest and moved onto something else.”

Allen is best known for founding Gong, a band of surrealistic space-rockers who have been demonised, satirised and worshipped in equal measure since first appearing in 1967. “There are all sorts of people in the music industry that have a great deal of time for Gong even though they don’t always admit it,” ventures Gong Appreciation Society founder Jonny Greene, citing Bjork, Damon Albarn and Mark Bowen, the head of Wichita Records, as just some of those among their rumoured fans. When contacted for comment however Bowen’s reaction was less than enthusiastic – “Bloody shite! And you can quote me on that!” Allen has, at the very least, always had a knack for leaving a lasting impression.

“I remember taking him to a rave at the height of the Manchester scene and he took over the party,” recalls Graham Massey of acid house pioneers 808 State. “He stood on this podium and made the whole party centre on him. Daevid’s got a weird energy. Some of his music is a bit like Gilbert and Sullivan, but it’s so good that it transcends all that – the dynamics are amazing; when they peak they really peak.” Boredoms main man Yamatake Eye is another paid up fan of the Gong guru who doesn’t mind people knowing it. “The music is mysterious and comfortable,” states the undisputed don of Japanese noise. “I have listened to his music since my childhood, but it took me ten years to realise it was all Gong. They are a very important band to me.”