Home Music Gorilla Mask: Iron Lung
The elements of the Iron Lung featured on the cover of this recording by Gorilla Mask has intimations of the 1928 “Drinker respirator” that was invented by Philip Drinker and Louis Agassiz Shaw, Jr., professors of industrial hygiene at the Harvard School of Public Health. But the music contained within has every echo of what might happen inside its ultra-modern incarnation: the Biphasic Cuirass Ventilator. And anyone who’s ever dived for galleons and their treasures would do well to do so into this extraordinary recording by Peter van Huffel and his Berlin trio with Roland Fidezius and Rudi Fischerlehner. Its nine tracks are roughly equivalent to The Bends; not the one referred to in Thom Yorke’s song, but what happens when your surface for air too quickly after every song only to be incarcerated by Gorilla Mask’s Iron Lung.

The primal scream of Peter van Huffel’s alto saxophone is at the opposite end of the silent one in Edvard Munch’s iconic 1893 painting The Scream most affectingly in “Blood Stain” where he plays off Rudi Fischerlehner, and more especially against Roland Fidezius’ red hot electric bass. The latter sound nothing like the Jaco Pastorius clones (mercifully) and his elemental roar throughout the recording is one of the most refreshing aspects of this recording. This is the best piece on the this album, 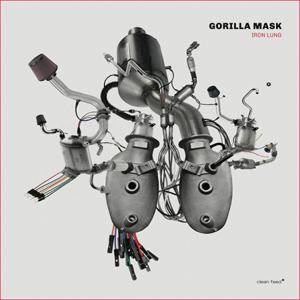 but the other songs are of such a high quality in terms of their massive assault on the senses that there is no let-up in the tension from “Hammerhead” – a monster from out of the primordial depths, so to speak – right down to the ninth song, “Chained”.

Think three-quarters of an hour in that Iron Lung without any anesthetic and no soft bed for the body to be ensconced in, or soft pillow for the head; just cold metal forming an echo chamber where you might as well get used to “Hammerhead” knocking into you or the rumble of “Steam Roller” for company when you succumb to being wrapped by a blood red sky. For this is the backdrop to the musical tapestry of Gorilla Mask through the nine songs. And if the open-mouthed scream doesn’t get you, then Munch’s red sky (of The Scream) will. It is the prevailing background to this music’s landscape. Gorilla Mask music receive high marks indeed for working off an invisible script and performing without any safety net but still maintaining the breathless rhythmic attack as they make broken melodies and raw harmonies come palpably alive. I must add that although it might look it, I am sure that none of this is malevolent, of course. What a ride for the listener…!