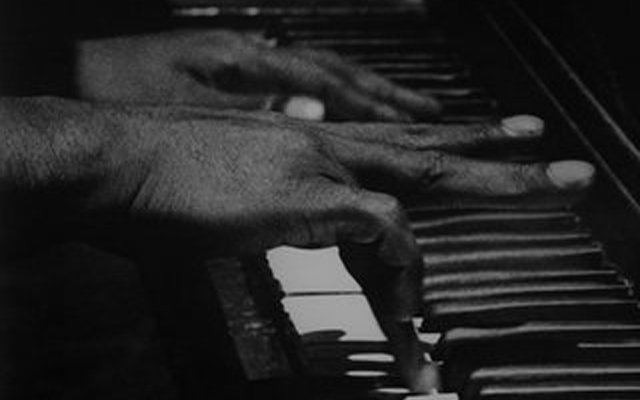 Clearly Mr Drummond appears to be one who would suit a Thelonious Monk Quartet as few drummers would. The drummer’s traversal of this music shows off his inimitable genius as he shares the music’s twists and turns with supple rhythmic flexibility. His approach to Mr Monk’s big-boned and generous space for rhythmic invention is evident in the sense of depth and spaciousness – which we hear on “Little Rootie Tootie”, for instance – that gives the piece an almost orchestral scale as Mr Drummond holds up the rhythmic canvas with brushes and sticks traversing the far corners of his drum set. His penchant for driving the music ever forward makes for exciting twists and turns at all times and we are never prepared for the surprises that often come fast and furious as he dives headlong into the development of a piece with every hint of real abandon on “Brake’s Sake” (Disc Three) for instance. Mr Drummond’s virtuosity is also powerfully and lovingly delivered, creating a glistening delicacy as a foil to the other musicians as he swishes his way through the cymbals and the snares on “Gallop‘s Gallop” (Disc Four). And there is many a high-voltage moment on “Work” and “Hackensack” (Disc Five) all of which are fully redeemed with the other members of the quartet where everything seems right in the sincere and poised accounts of each of the musicians. 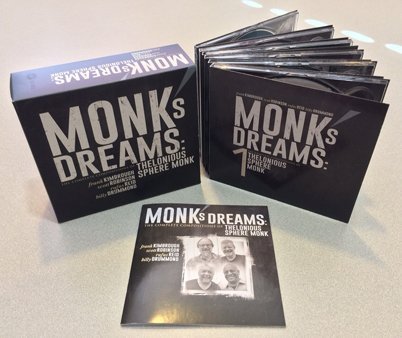 Perhaps the most diffident performance of all the players of the quartet belongs to the great Rufus Reid who, at the best of times throughout his career has never been one to shout out loud – not about his rhythmic credentials, nor of the melodic and harmonic richness that he often brings to the music on which he participates. There have been many benchmark performances during Mr Reid’s illustrious career as a bassist and as a musician. Much of his achievement both as a virtuoso contrabassist, as an interpreter of some of the greatest Jazz scores – these seventy works included – has remained under appreciated because he rarely steps out of the shadows. But when he does, albeit briefly as he does on “Boo Boo’s Birthday” (Disc Two) his soli are impeccable. Few bassists play idiomatically – Mr Reid is never flashy, unlike many of his flamboyant contemporaries. Nothing he does with his pizzicato technique – especially on “Monk’s Dream” (Disc Three) – is ever forced or exaggerated, or overly mannered; tempi and balance are all effortless and intuitively right. His string sound is always lucid. His fingers of both hands caress each of those strings adding warmth and continuo that musicians as soloing musicians launch themselves on their missions.

While the heavy lifting is shared by all of the musicians – particularly between Mr Robinson and the pianist – it is Mr Kimbrough upon whom the full weight of this music rests and so it will ultimately be judged by how or what refreshment he brings to the timeless music of Thelonious Monk. In his day (and forever, really) Mr Monk will remain His Royal Outness – an epithet that might be used to suggest how completely unexpected his harmonic conceptions are; and yet how noble his music is especially when evaluated in the history of the instrument he left an indelible mark on by the revolutionary approach to it. Often it feels as if Mr Kimbrough breathes life into the words of a certain J.S. Bach who once said “Like all music, the figured bass should have no other end and aim than the glory of God and the recreation of the soul; where this is not kept in mind there is no true music, but only an infernal clamour and ranting.” The way he struck the keys with the gnarled flesh and nails of his fingers, the way the pedals were depressed all spoke to a manner in which Mr Monk’s unique and musical brain communicated with the synapses that coursed through the system right down to the nerve endings of his hands and feet. And that happened to a human being just once in a lifetime. We know that. Mr Kimbrough does not try to be Mr Monk. But what he succeeds in doing is inhabit his music as himself. And because he does this we have the opportunity to listen to one interpretation of the proverbial, so-called Monk’s Dream. At Mr Kimbrough’s hands we have a front row seat to Monk-music that is full of glinting lights, mysterious depths, expectations, doubts, frustrations and ultimately hopes. In the sheer colour and variety, in the depth of its characterisation and the exceptional range and refinement of its pianism, Mr Kimbrough here imparts a power and unforgettable stature to the music of Thelonious Monk.