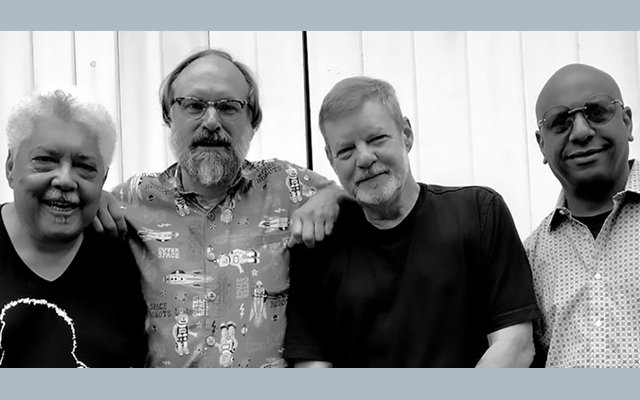 Frank Kimbrough has followed in the footsteps of (principally) Roswell Rudd and Steve Lacy who long ago made the first efforts to throw a bright spotlight on two of the greatest geniuses of Jazz: Herbie Nichols and Thelonious Monk. Like the late trombonist and soprano saxophonist, Mr Kimbrough was the prime mover in The Herbie Nichols Project, which recorded repertory comprising little known gems created by Mr Nichols after Mr Rudd and Mr Lacy had made several iconic albums making clear that this was music that de rigueur had not only to be preserved by paid forward. But this project – to record The Complete Compositions of Thelonious Sphere Monk via an enormous six-CD box-set – is something unprecedented and ought to be viewed as such. However, being the tall order that it is, the musicians – Mr Kimbrough, reeds and winds specialist Scott Robinson, bassist Rufus Reid and drummer Billy Drummond – would also be required to sustain interest and energy themselves to make something extra-special happen over seventy Thelonious Monk compositions that we know of so far. 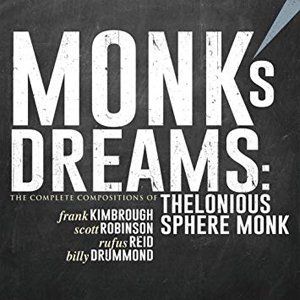 But that’s not even a miniscule part of the challenge. Mr. Monk’s music is brilliantly sweet and tender to the ear, but diabolically difficult to play. Like Mr Nichols whose bass line melodies have still not been fully grasped and appreciated by musicians, Mr Monk’s music is like a bottomless, yet fascinating mine of harmonic and rhythmic that will take years to by fully appreciated. Also without doubt is the fact that, like the music of contrapuntal inventions of Bach the music of Bird, Mr. Nichols and Mr Monk will offer endless challenges for the experts and the foolhardy who think they’ve “got it”; found their Holy Grail, only to find that it’s actually like something mythical, still evanescent, even illusory. That’s not to say that many significant recordings of Mr Monk have not been made by pianists like Mr Kimbrough. Who can forget Bud Powell’s A Portrait of Thelonious (Columbia, 1961) with Pierre Michelot on bass and Kenny Clarke on drums? Chick Corea’s Trio Music with bassist Miroslav Vitous and drummer Roy Haynes and the more recent recording Monk Dreams, Hallucinations and Nightmares by Frank Carlberg are two of the most outstanding recordings albeit very different in their approaches to Mr Monk’s music – especially Mr Carlberg’s one which takes interpretation to a rarefied realm – both literally and figuratively. However, no one – certainly no pianist – has ever had the gumption to approach all of Mr Monk’s repertoire.

How much Mr Kimbrough was challenged by the idea and is a moot point now that we have the whole package. Bringing together like-minded musicians is also easier said than done. Except on two occasions Mr Monk played in a quartet setting and although several saxophonists, including such giants as John Coltrane, Sonny Rollins and Johnny Griffin; several bassists and drummers passed through the University of His Royal Outness. His quartet was never as settled as John Coltrane’s famous one, but no one was able to have as tacit an understanding of his music as tenor saxophonist Charlie Rouse, who was to Mr Monk what Harry Carney was to Duke Ellington, Dannie Richmond (perhaps Jaki Byard) was (were) to Charles Mingus and indeed the three souls of the “Classic Quartet” were to ‘Trane, and who always seemed to be at the right point in the musical idea when Mr Monk decided to lay low. In Scott Robinson Mr Kimbrough may have found a perfect foil for Mr Monk’s music – at least on this mammoth project. Their bonding during the rehearsals and performances with Maria Schneider’s ensemble has certainly stood them in good stead for Monk’s Dreams. Mr Robinson is also not only a superior intellect artistically speaking, but he brings an intuitive brilliance to this music so much so that he and Mr Kimbrough parlay with the familiarity of old friends, yet their playing always retains that sense of magic – and etiquette – associated with the nobility between Mr Monk and Mr Rouse. Additionally, Mr Robinson wields winds and reeds all of which are played – some rarely – with uncommon virtuosity. This in itself often brings new meaning to many of the harmonic dialogues between himself and Mr Kimbrough.

At other times Mr Robinson makes absolutely magical things happen without Mr Kimbrough. On “Reflections” (Disc One), for instance, playing bass saxophone, he brings a wonderful and prescient darkness to the music with Rufus Reid and on “Blue Sphere” (Disc Five) he leaps and frolics on tenor saxophone with a like dancing Mo0nk-like ebullience, this time jousting with the incomparable Billy Drummond. On Disc Two Mr Robinson exchanges rippling percussive chops with the members of the quartet – this time playing the unusual echo cornet – on the rarely played gem “Bluehawk”, polishing the melody and then buffing it to a rare and gleaming perfection with his solo. But it is not merely the fact that he plays unconventional instruments that brings fresh tone colour and timbre to Mr Monk’s music. Try his trumpet outing on “Children’s Song” (Disc Four). There is also a bleating urgency to the bass clarinet on “Locomotive” (Disc Four) and a mighty growl to the contrabass sarrusophone on “Straight No Chaser” (Disc Six). Mr Robinson also pushes his chops to the limit on the tenor saxophone: consider what he does to the wailing solo in the upper register of the instrument on “Eronel” (Disc Two). Never has the otherwise deeply sinuous instrument sounded as magically high-sprung as at the hands of Mr Robinson, who also explores the rich sonorities and ultra-soft dynamics of the horn with breathtaking beauty – especially in his exchanges with Mr Drummond, who waves his brushes like a pair of magic wands on the skins of the drums.