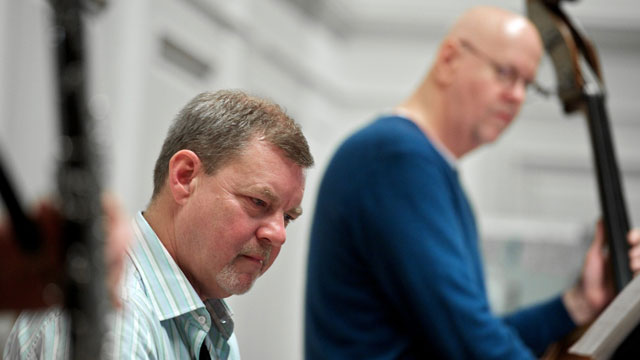 The ideas of pianist Frank Kimbrough that echo in the mind find remarkable expression not only in his pianism, but also in the playing of saxophonist Steve Wilson, bassist Jay Anderson and drummer Lewis Nash. With good reason. There is some fine writing for the Frank Kimbrough Quartet on its eponymously titled release. And each of the players seems to have related to their individual roles with a symbiosis that will be the envy of many an ensemble. Once again Mr. Kimbrough strikes out on a bold adventurous course, leading the rest of his ensemble into the profoundly beautiful repertoire with unfettered panache. The romance of his playing provokes them to make music of great emotional power. The pianist leads into the music almost imperceptibly as though through a morning mist, before soaring aloft with a chaste tenderness that captures the reflective nature of the music to perfection. This gives the music a wonderful rounded form and exhilaration, as well as a sense of forward motion. In this regard he finds a staunch ally in Steve Wilson, whose own infections rejoicing is fetching, and between the two musicians the bassist and drummer are holed as well. Through it all Mr. Kimbrough demonstrates commanding musicianship. 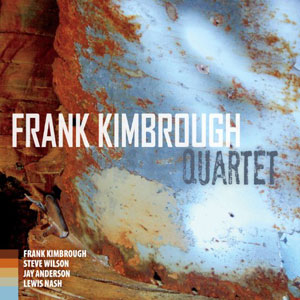 Frank Kimbrough is a quiet virtuoso pianist. His technical brilliance has been swathed in the gorgeous arrangements of Maria Schneider’s Orchestra. On his own, however, his ability to express himself with an almost spiritual fervour is legendary. His playing flows with a delightfully natural ebullience and conjures magic in the delicate manner in which he expresses himself throughout the reading of the material at hand. The ruminative “November” and the exquisite beauty of his (and Steve Wilson’s) playing on “Ode” are classic examples of this on the disc. Both men play with tight precision and give virtuosic figures in the music new meaning. The spacious cadenza of “Ode” combines limpid vocalise with insouciant runs. And yet Mr. Kimbrough seems to play with unselfconscious simplicity. Mr. Kimbrough also keeps things splendidly in control and this characteristic is infectious. The intense concentration of other musicians makes for always staying “in the pocket”. Mr. Wilson’s playing must also be given due respect. His warm tone and statuesque gravitas is combined with superb application of light and shade. His playing also relaxes the mood of the pieces artfully and melodies are despatched with airy grace and charm. Such is the imaginative playing of these two men, and their equally supportive rhythmic colourists that the music is ushered home with harmonically loaded melody and rhythmic excellence. Listen to “Afternoon in Paris” and you will see how true this is.

Through all of this comes music that is unfailing in clarity and innate elegance. There is an unerring sense of proportion, a finely-honed mastery of style, melodic finesse and unobtrusive grasp of harmonic rhythm. These are to a note, exemplary performances. Tellingly the record is led to its final dénouement with an almost unbelievably beautiful performance of “It Never Entered My Mind”.

Pianist/composer Frank Kimbrough has been active on the New York jazz scene for more than 30 years. He is currently a Palmetto recording artist, having previously recorded as a leader for OmniTone, Soul Note, Igmod, and Mapleshade. Frank was a founding member and composer-in-residence of the Jazz Composers Collective (1992 – 2005) and during the Collective’s existence played in nearly twenty of its associated groups. He continues to perform solo concerts and with his trio, and is otherwise in demand as a sideman. Frank’s playing has been recognized by his inclusion in the Downbeat Critics Poll each year since 2001, and his recordings are often included in jazz critics’ year’s-end top-ten lists. QUARTET, Frank’s latest CD, is new on the Palmetto label, and features Steve Wilson on alto and soprano saxophones, Jay Anderson on double-bass, and Lewis Nash on drums. It includes seven of Kimbrough’s original tunes, with Kurt Weill’s “Trouble Man”, John Lewis’ “Afternoon in Paris”, and the Rodgers and Hart standard “it Never Entered My Mind” rounding out the program..Read more…