Home Music Darrell Katz and the Jazz Composers Alliance Orchestra: Why Do You Ride? 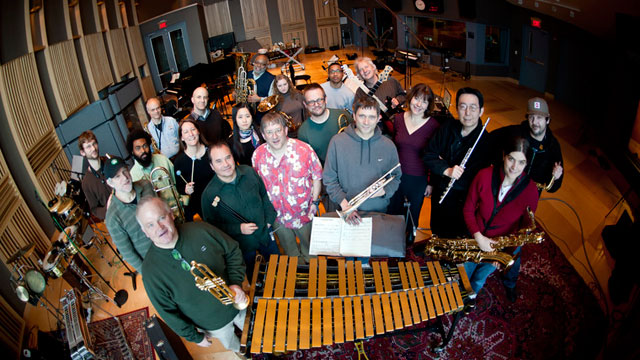 With gravity amid the absurd and the precision of detail it was Jorge Luis Borges who created a rich apocryphal myth with a parallel Don Quixote in his story Pierre Menard author of the Quixote. As in literature so in music; only here Darrell Katz has invented a delightful fraud in “Wheelworks – Things That Albert Einstein Did and Didn’t Say,” a suite so pure and mad at the same time, which seeks neither truth but merely the likelihood of pure astonishment couched in absolute scholarly musical deportment. If the sheer audacity of the imaginative narrative deception is beckoning how much more is the relevant grandiosity of its execution—Borges-like and sublime. This is the exact wonder of the Jazz Composers Alliance Orchestra’s Why Do You Ride a breathtaking eight-part invention delights as much as it mystifies and dazzles at the same time. After his splendid Amazon cycle, Darrell Katz and the Jazz Composers Alliance Orchestra turn their attention to this truly different repertoire, demonstrating what a wide range of music they can illuminate with their intelligent, imaginative playing. 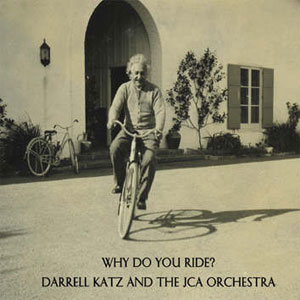 Much of the ubiquitous “Wheelwork,” the eight-part chamber piece proceeds in a state of elevated emotion. What makes the playing so beautiful is that there are no clear signposts between the movements and yet the ensemble proceeds intuitively from one startling movement to the other. The Orchestra certainly doesn’t hold back from sweeping intensity, but they still retain a measure of objectivity, finding places to relax and never pushing the expression beyond what sounds beautiful, capturing perfectly the deep tranquility of the central story with its distinctive arrhythmia. The sound world of “Why Do You Ride,” the central question to the mythical character is bright and cool and evoked with equal conviction to the illusion and reality of “Wheelworks”. Here the orchestra has a fuller tone and plays with a more romantic sweep, equally compelling in the care for expressive detail, hinting at moods of gentle nostalgia and emotional fragility—befits the linear simplicity of the bicycle.

There is a similar contrast in the tone of the dramatically executed “Monk’s Mood” executed by the superb woodwinds of the JCA Sax Quartet. The sound here is at times more robust and more strongly projected. At times in the back end of each verse of Thelonious Monk’s brooding tune, the mood is also delicate and intimate. This blues movement produces startling results; the details are wonderfully idiomatic, yet the playing is so refined that when the music later breaks out of its shell, the contrast in the colours is extraordinary. It’s like a strange distorted dream of a jazz performance. The effect of this short piece with an even more shortened ensemble is similar to the rest of the tonal colours of the larger piece; it is highlighted by the precision in capturing the idiomatic blues and is allied to vivid juxtapositions of power and delicacy. All of this adds up to a must have recording.

Track List: What Do You Ride?; Wheelworks: I – Any Intelligent Fool; II – What Did Albert Einstein Say?; III – Riding a Bicycle; IV – Under the Cloak of War; V – Sticks and Stones; VI – The Mysterious; VII – A Better teacher; SemiBadGirl; Monk’s Mood

About the Jazz Composers Alliance Orchestra

When The Jazz Composers Alliance was founded in 1985, its agenda included the establishment of an active public forum for the presentation of new jazz works, the creation of the JCA Orchestra, and a concert series that included a visiting composers program. Since then, the JCA initiated the Julius Hemphill Composition Awards, an annual competition promoting the most interesting and progressive work by jazz composers around the world. There have been over 15 resident composers writing for the JCA since its inception. With some of New England’s finest improvising musicians in its ranks, the JCA Orchestra has premiered over 120 new pieces by its resident composers along with commissioned works by Muhal Richard Abrams, Marty Ehrlich and Wayne Horvitz among others. Read more…