Ferenc Nemeth’s drumming has evolved from two schools of music. First there were the conservatoires of Western Classical music in Győr and Budapest, where he probably learned from Bach, Beethoven, and Brahms and, of course, Liszt – especially Beethoven, who implored all would listen, to “force your way into its [music’s] secrets, for it and knowledge can raise men to the Divine.” And later, at Berklee and the New England Conservatory, he learned studied Jazz – the music of Black America, a music which also raised men to the Divine via the Blues and then Jazz. The “raising of men” of both Beethoven and the Black American was the triumph of soul and spirit over body, all of which is summed up in one word: “Freedom”. 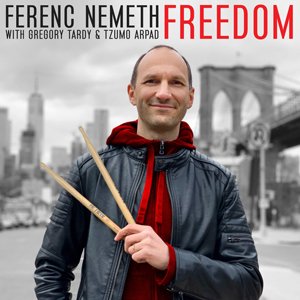 The word “Freedom” is fraught with symbolism for Mr Nemeth, who also grew up in Hungary, during its affiliation with the erstwhile Soviet Bloc. It was the first country to revolt against its Soviet masters, but that revolution [in 1956] was brutally put down. Jazz music with all of its associations with the USA [not to mention freedom-loving Black Americans] was also frowned upon and pushed underground for some time in Hungary. All of this has played into Mr Nemeth’s musicianship and recordings as leader at one time or the other and now bursts forth in, perhaps, his most personal and definitive statement on the subject.

This repertoire on Freedom is set around a series of five drum interludes. It is important to recognise this fact. These interludes are spread out through the album – fragments of a “percussion suite” where the most intimate “voice” of the drummer have been highlighted. Mr Nemeth’s unusual stepping out into the spotlight is also highlighted by the use of his own [human] voice channeled through vocoder-like electronics where it is synthesized and manipulated – a proverbial doffing of the hat to Josef Zawinul, who often did likewise in his own later repertoire. An important characteristic of this album is also Mr Nemeth’s spare use of instrumentation, and arising from this, also his rangy harmonic conception which is crafted by Tzumo Arpad’s keyboards and piano.

This leaves tenor saxophonist Greg Tardy as the sole melodic voice in this music. Mr Tardy brings the voice of mystic longing to these songs – especially manifest on songs such as “Freedom” – into which Mr Nemeth seems to have poured his very soul – as well as on the soaring “Dare to Dream”, in the lissom lines of “Bluefrica”, the ululations of “Marrakesh” and, of course the soaring music of “Triumph” and “Freedom” – the latter two of which essential hubs in the axels of this recording and propel its music in to a higher realm.

Most of all the music showcases Mr Nemeth’s abilities as a drummer and percussion colourist; an artist of the highest order, whose music has fine architectural dimensions that come not only from a profound knowledge of time and space, and the pivotal role it plays in his music, but also from the wonderful melodic and harmonic ornamentation that this compete musician brings to these most public expressions of his often intensely private world.