Even if you didn’t know that Aubrey Johnson has enviable musical pedigree you would still be struck by the bravura of her musicianship. As a vocalist Miss Johnson has been blessed by an incredible vocal range. But merely having one does not necessarily mean being able to use it. However, Miss Johnson not only exploits her prodigious gift of her voice but exploits it by subjecting it to such extreme tests of elasticity that it will leave you breathless; in fear that something might snap without warning. None of this happens to her, of course, and Miss Johnson goes on to craft one of the most memorable vocal recordings in contemporary recording. 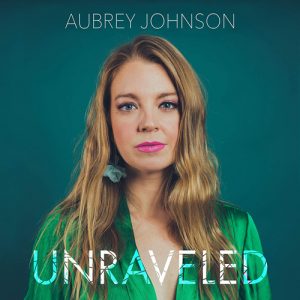 The recording is called Unraveled, which serves as both a musical metaphor for the unraveling of her professional music debut and so on, as well as a rebirth of sorts in life. Many traumas have been dealt with recently – some Miss Johnson deals with in the lyrics of her songs – “No More ‘I Love You’s” and “Love Again” – others are crafted into the melancholia of her delivery of songs themselves. An outstanding example of this is her rendition of Jimmy Rowles’ iconic and much-covered song “The Peacocks”.

But Miss Johnson is far from done with her virtuoso vocalastics through the album and reserves the best for last: Her vocalastic interpretation of Egberto Gismonti’s “Karate” is absolutely breathtaking. Apart from the impossible leaps and Challenger-deep dives into the art of vocalising, Miss Johnson shows that she can sing as well as “play” with her voice at the same time. Moreover – as her vocals on “Karate” show us, she has an expert understanding of vocal dramaturgy as she transmutes all of the qualities of Mr Gismonti’s instrumental song to the vocal realm bringing to life as she breathes a beautiful and childlike humanity into it. All of this takes place while Miss Johnson puts on an elegant display of her myriad abilities: the use of her nasal voice, throat voice and – with exquisite diaphragmatic breathing – her chest voice too.

The decision to share this music with [in this instance] the accordionist [in] Vitor Gonçalves is truly inspired. The choice of all of the other musicians is inspiring too – and the choice of deploying Michael Sachs’ bass clarinet [from a musical/production standpoint] on seven songs is audacious, as is the addition of violinist Tomoko Omura’s too – both musicians bringing something truly special to the music on which they play. But that’s not all; Miss Johnson’s ensemble all of who have interiorised this music are also fully invested in her vision and artistry on Unraveled and it shows in the idiomatic performances throughout this unforgettable recording.

After Miss Johnson finished this recording, sadly, her uncle – the great Lyle Mays passed away. Even if you didn’t know how much of an influence Mr Mays appears to have had on his niece’s musicianship, you only have to listen to his exquisite composition “Chorinho”, then come back to Miss Johnson’s version of “Karate” to experience the heavenly connection… and wipe down the tears that you might shed – as I did – rather unabashedly.