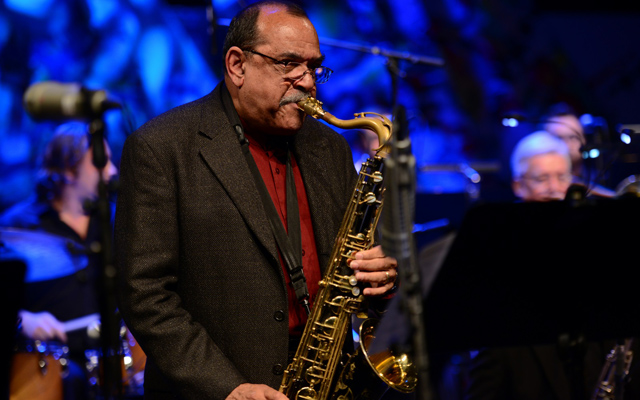 There is nothing like the feeling of hot, moist breath barrelling out of the bell of Ernie Watts’s tenor saxophone. The speakers shudder as you immediately reminded that Watts belongs to the continuum of the great tradition of the tenor saxophone. His powerful ‘voice’ manifests itself in a myriad of vivid tonal colours. Ernie Watts never gained a reputation of an edge-of-the-seat risk-taking virtuoso. Instead his playing has always been raw, elemental and as richly faceted as a diamond that reveals itself from carbon-black, crystalline coal. This CD is the absolute thesis of that: a selection of pieces evoking atmospheres of longing, sorrow and nostalgia. Universal emotions are at work here; even if you leave the title Wheel of Time aside, you will find something on this CD to enjoy, fall prey to or identify with. 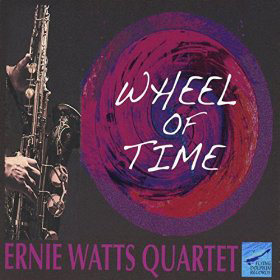 Ernie Watts’s playing is visceral and eloquent at the same time. His voicing is expertly balanced between the two. Small wonder then why he can make his tenor saxophone sound brazen in ‘Andi’s Blues’ or ‘Velocity’ and svelte in ‘Letter From Home’ or in ‘Wheel of Time’ his profoundly beautiful homage to his friend and late bassist Charlie Haden. Watts’s phrasing ‘sings’. His fingerwork is scintillating in songs like ‘Goose Dance,’ ‘velocity and ‘Inner Urge’, a piece that glimmers in the afterglow of otherworldly beauty. Add to all of these facets of the various pieces on this disc is the absolutely rhapsodic nature of Watts’s playing created by the most perfect flurries of notes punctuated by echoing silences as he fills his lungs with air with which to blow the next set of the most magnificent lines imaginable.

Watts’s captivating ability to illuminate even the most densely packed musical terrain in ‘L’Agua Azul,’ which for once emerges as a structure of supreme logic, propelled rather than merely embellished by mystical ripplings and flutterings. The haunting introspection of ‘Wheel of Time’ is magically conveyed. The saxophonist also excels in conjuring up the massive clangourous sonorities required for ‘Velocity’ without any harshness of tone, yet also possesses a deft touch, fleet-fingered touch balanced with circular breathing which is ideal for balladry. This is highly accomplished disc by an artist who will always remain on the leading edge of music no matter what his age. These supernatural performances really get under your skin.