This recording recalls what must easily be one of the most significant milestones in African-American history: the 1921 Broadway Musical Shuffle Along by two great pioneers pianist Eubie Blake and lyricist Noble Sissle. It played at the Daly’s 63rd Street Theatre and after 484 performances ended its spectacular run. The show then toured across the United States for three years and became the first African-American musical to play in the country, presenting such flaming hits as ‘Just Wild About Harry’ and ‘Love Will Find A Way’, contributed to the integration of theatres across the country and provided an opportunity for Josephine Baker, Adelaide Hall, Florence Mills, Fredi Washington and Paul Robeson with their first chance to appear on Broadway, launching their highly successful careers. 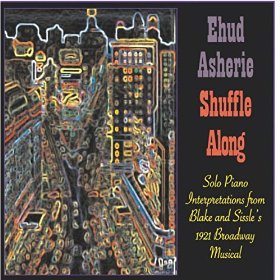 These nine pieces for piano (excerpted from the musical’s two acts’ 17 pieces) are both technically and expressively, a summit of the repertoire whose multiple challenges few, if any, pianists could resist. None have, however, taken up the gauntlet. The brilliant pianist Ehud Asherie appears to be the first to record them since Blake and Sissle recorded an abridged for of the work for RCA Victor in 1952. Asherie is one of the young geniuses of his generation whose pianissimo pyrotechnics have lit up concert halls on both coasts of the US and elsewhere around the world as well. But all thoughts of inflated self-worth are summarily banished by this outstanding CD. Wisely choosing an unfamiliar entry into very familiar terrain, Ehud Asherie begins with ‘Gypsy Blues’ which Blake and Sissle composed as the last song in Act 1 of the musical.

Michael Steinman rightly observes in his excellent liner-note, whet Asherie does with this music is highly engaging. It’s a showpiece and Asherie plays it and others like that, with exceptionally clean articulation in the flashes of virtuosity, and elegance in lyricism. Each of the nine pieces is vividly characterised, with Asherie running the gamut between dark turbulence and beautiful tranquility with absolute assurance. He does not waste energy trying to find novel approaches – he just lets the music speak, exercising restraint where other young pianists take showy liberties. I’ve seldom heard ‘I’m Just Wild About Harry’ rendered with such persuasive grace, nor the near-and-far-bells of ‘Bandana Days’ played so charmingly.

But Ehud Asherie’s playing is full-blooded, and when the musical asks for the impression of a rush of blood to the head, that is what Asherie conjures up. Every piece is a delight on this slim but entrancing revival of music to die for.