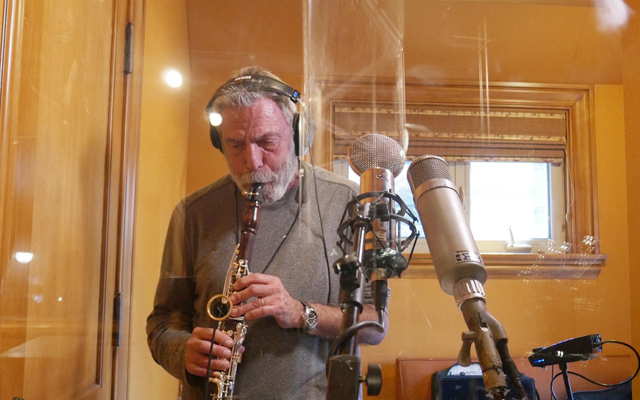 Eddie Daniels has become, without a doubt one of the finest clarinetists in the past fifty years or so. In fact, apart from Paquito D’Rivera, there is probably no one who plays this unforgiving instrument with more virtuosity and elegance than Mr Daniels. But even with his genius on the proverbial “licorice stick” absolutely nothing could guarantee that he would be able to pull off such demanding repertoire by one of the greatest composers of music of our time: Egberto Gismonti. Here is a musician who was spurred on to find his voice, refine his vision and reach for his Holy Grail back in Brasil by Anton Webern’s pupil, Jean Barraqué, and the legendary pedagogue Nadia Boulanger. The latter urged him to “be a little irresponsible in [his] music, just trust and break the rules” which drove him to the indigenous peoples of the Amazon rain forest and their music. This encounter altered his perspective, changed the expressive possibilities of musical language and fertilised his work. 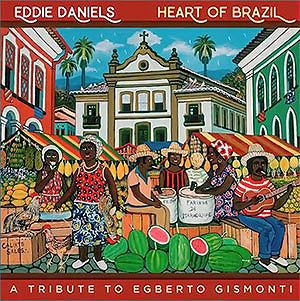 But just as much as Mr Gismonti worshipped at the altar of originality, so does Mr Daniels. Moreover, the clarinetist’s gift of discernment accounted for his being able to align his imagination and sublime artistry with that of Mr Gismonti’s own creativity and vision. Heart of Brazil resulted from this unique “partnership”. Although Mr Daniels plays (his old instrument) the tenor saxophone on a few tunes here, it is with the clarinet that his reputation on this repertoire by Mr Gismonti rests. You hear something masterful and inimitable every time that Mr Daniels makes music with each compression wave; every magical puff of air, that is. The tapestry of this music is unfurled as wondrously in the rich dark swirls of the chalumeau register, as it is in the clarion-bright and sweet calls and keening shrillness of his altissimo twists at the end of choice phrases.

Not only does Mr Daniels put the iconic cylindrical bore of his legendary Backum woodwind instrument to create immeasurable beauty from its three registers but he exploits the intricate key organization of the clarinet that makes some of the most impossibly difficult passages in Mr Gismonti’s music seem like child’s play and while there are beautifully sculpted phrases and lines throughout this recording one is left gasping audibly, on the white-knuckle ride, for instance, on the joyous chatter of “Lôro”, the insouciant leaps on “Folia” and the profoundly majestic solemnity of “Maracatú”. So, of course, at the heart of this disc, aptly entitled Heart of Brazil is magnificent performance by Eddie Daniels and the classic repertoire by Egberto Gismonti. But let’s face it we would be remiss if we did not doff the proverbial hat to the other aspect of this disc that makes it one to absolutely die for:

Firstly there are the musicians – chief among them being Mauricio Zottarelli, without whom this music would never have unfolded with as much elegant rhythm, which is, again, so much as part of all-things Brasilian. But it’s not only the Brasilian-ness of Mr Zottarelli that drops the de rigueur anchor in the sweet spot of this ocean of music; rather it is because Mr Zottarelli has literally mastered the art of reincarnating himself as a melodist, harmonist and rhythmist – each in its turn, sometimes combining all of the three elements in his music. Secondly it is the inspired choice of bringing in the Harlem Quartet and it is their extraordinary performance that contributes mightily to placing Mr Gismonti’s music in its rightful place which is right in the realm of the music where Heitor Villa-Lobos rests.

And finally all this has to do with the genius and incomparable wisdom of George Klabin, Founder of Resonance Records and producer in the mould of the illustrious producers involved in the long list of iconic productions including symphonic and operatic in the classical world. Why, one might well ask…? Well, it is Mr Klabin who set the list of music to be played, brought in the terrific musicians to arrange and perform it, and last, but not least, (assisted by Fran Gala; of course), preside over the console in order to deliver this impeccable recording to us.