Even if the project – for it is just that – Unknown Dameron by composer, arranger, saxophonist, pedagogue and author Paul Combs did not turn into the double-disc that Mr Combs intended it to be, it still has the qualities of an epic one. At just over hour long the single disc is packed with twelve unrecorded and seldom played gems by the i9nimitable composer and arranger Tadd Dameron. Coming as it does from Mr Combs, a musician and scholar of deep erudition, this work dramatically expands the instantly recognisable repertoire of Mr Dameron from a mere eight songs, in one fell swoop, to twenty. This is to say, that once this recording of Mr Dameron’s songs – arranger here by Mr Combs – has been heard, there is every indication that musicians ought to falling over themselves to listen deeply and jump on these wonderful compositions (and arrangements) that have been rescued from near-oblivion, with a view to recording them.

Mr Combs had already distinguished himself (speaking of scholarship) for his 260-plus page biography of Mr Dameron entitled Dameronia: The Life and Music of Tadd Dameron (University of Michigan Press, 2013). One assumes that in the process of his meticulous research he unearthed these songs. Actually his dig yielded many more of Mr Dameron’s unknown charts, but these, we have been told, are mired in copyright and other litigious messes 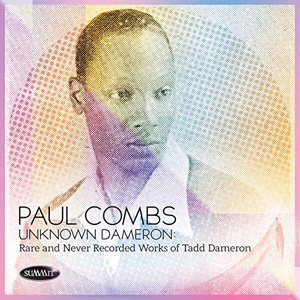 which meant Mr Combs was unable to put them down on record in time to complete this project. More’s the pity as this music proves. It is a stupendous recording as it is, expanding Mr Dameron often moody but always glorious canvas to include art that has been hidden away for many decades. So why unearth it now?

The answer lies, quite simply, in the fact that Mr Dameron is one of the most important composers not only of the generations that include such great men and women as Duke Ellington and Billy Strayhorn, Mary Lou Williams, Charles Mingus Charlie Parker and Dizzy Gillespie, Thelonious Monk, Herbie Nichols and a handful of others, but also the likes of George Gershwin and the composers of music in found in what is often referred to as the Great American Songbook. A songwriter and infrequently a lyricist too, Mr Dameron was a teller of stories on an epic scale, often making attempts to leap outside the scope of the two and three minute song. He was also a remarkable pianist who helped his own music leap off the page with his musicianship, which was on display for at least three decades with a host of great Jazz musicians including Fats Navarro, Miles Davis, Cecil Payne, Dizzy Gillespie and others.

In a masterful sleight of hand, Mr Combs has recreated that canvas by “painting” over with arrangements evocative of Mr Dameron’s work with Charlie Rouse and Ernie Henry, Cecil Payne, Fats Navarro and others. From the buzzing rumble of “Conversation” and “The Rampage” to the dreamy glissandos of “Moon from the East” and “Come Close” Mr Combs has recreated these charts of beguiling variety and sensuousness in every lovingly caressed phrase. Focusing on the unknown gems from an incomparable composer Mr Combs has wrought, from his ensemble, performances of the kind of dramatic tautness and the élan; something for which Mr Dameron’s compositions have always known.

Listening to the way in which Mr Combs himself bends the notes in “Conversation” and “Sando Latino”, and how trumpeter Derek Cannon sculpts the long inventions of “Don’t Forget It”, or how pianist Kamau Kenyatta makes the black dots of “A La Bridges” leap off the page, it’s clear that there’s not a semiquaver that hasn’t been fastidiously considered. The recording also features pianists Bill Cunliffe, Melonie Grinnell and Ken Cook, bassists Jeff Denson, Alex Frank and Rob Thorsen, drummers Alex Aspinall and Richard Sellers and vocalist supreme Danielle Wertz; all musicians who are completely attuned to Mr Combs’ and – more importantly – Mr Dameron’s – vision and artistry. Booklet notes (baring a few unfortunate typographic slip-ups) are detailed and revelatory, and Mr Combs also adds his inimitable historical and discographical detail to each song. It’s a recording to absolutely die for…