History is recorded in the bones of men and women who are long since ghosts of our past. But the cultural topography upon which they have treaded can be kept alive if we can be still and listen to the stories that have been somehow, shaken and set free to roam in the wind. These are the stories of griots – ancient and modern – who heard things from the songs and stories told and sung by their ancestors. Much of this is lost, today, in the noise of everyday life, but not in New Orleans…. Still, the griots sing… the jazz griots… they sing their stories and their poems… vocally and instrumentally they make and pass on history, just like Danny Barker did not long ago and just like Don Vappie does today – spreading the gospel of music from a pulpit somewhere in New Orleans. 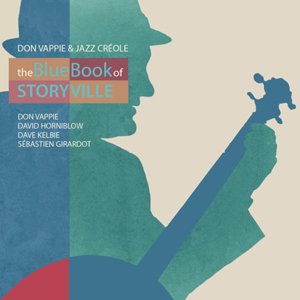 Mr Vappie is one of the great créolité griots of New Orleans. He embodies the quality of being Créole the highest degree just as Monk Boudreaux does. And like Monk Boudreaux he is fervent evangelist all things créolité. Mr Vappie sets stages aflame wherever he goes and he is just as magnificent on record as well. The Blue Book of Storyville is one such recording. The 17-strong, hour and almost ten-minute-long recording is brimful of masterfully delivered narratives – many of which he sings in his gloriously-cultured and highly-emotive tenor, always accompanied by his effervescent banjo. The brainchild of this performance – or at least the one who masterminded its production is the English musician, archivist and entrepreneur who just so happens to also be an ethnomusicologist and dyed-in-the-wool disciple of the Jazz tradition – whether its source is manouche or – in this case – créolité.

The repertoire is a judicious mix of originals by Mr Vappie, Jelly Roll Morton, Kid Ory, Spencer Williams and traditional music that receives Mr Vappie’s unique treatment and interpretation. Mr Vappie is a born storyteller – an urban griot, who has lived the music and has consigned all of it to the centre of his being. Each of the songs speaks to him in a highly personal manner in the epicentre of his heart from where – and with which rhythm – it is released through his lips. He is a vocal artist of the first order. His instrument is lustrous, bathed in warmth and radiantly burnished. His phrases are eloquently delivered. He sings and recites the lyric like a gentleman of extraordinary créolité nobility, accompanying himself on the banjo with unblemished virtuosity. Each and every work constitutes a new benchmark version. “Eh la Bas”, “Buddy Bolden’s Blues”, “Mischieu Banjo”, “The Roof Blues” and “Fais Dodo” are particularly unforgettable.

Mr Vappie is joined here by wonderful musicians. Mr Kelbie keeps perfect time (sometimes almost too unobtrusively) on acoustic guitar, Sébastien Giradot anchors the bass line melody and clarinetist David Horniblow soars in perfectly sculpted arcs and parabolas, often soloing in response to Mr Vappie’s voice and banjo. The best part of the performance of these musicians is that each is perfectly attuned to Mr Vappie’s vision and artistry as well as to the subtle rhythm and narrative of New Orleans créolité music. This music is also captured with an extraordinary warm acoustic. Music and engineering, indeed the whole package speaks of what historic masterpieces are made of.