The raga Todi played exquisitely here by the great sarod master K. Sridhar was performed – as prescribed – one morning in Sweden and fortuitously captured on tape by Sigge Krantz, is one of the pillars of the Country & Eastern label, founded by the great ethnomusicologist, musician and percussionist Bengt Berger (who is also heard on tabla, appearing here under his Indian given name, Sopan Dev). Another Swedish musician, Sten Sandell performs on tanpura. As Mr Berger writes in his notes to the release, “… as preparation for a theatre play at the Swedish theatre group Unga Klara in 1991, Sridhar was leading a yoga workshop – one morning we played a concert for the ensemble and staff.” Some perspective is necessary before approaching this masterful performance. 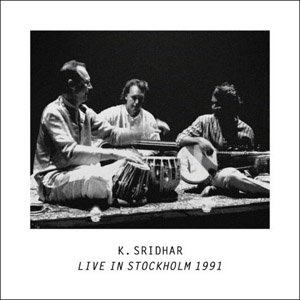 In India music is believed to be begotten at some point in the interminable spinning of the wheel of all existence. All existence is quite exquisitely described in the Sanskrit phrase: Parasparopagraho Jīvānām or “All life is bound together by mutual support and interdependence.” It is translated as “Souls render service to one another”. This gives rise to the belief that every living being, from a plant or a bacterium to human, has a soul. The performance of music is uniquely bound to the celebration of this interdependency and microcosmically-speaking each composition is assigned a special place and time for performance within this celebration. For Raga Todi, this time is mid-morning which is when this performance by K. Sridhar took place in Sweden.

This is the Hindustani (North Indian) classical version of an immaculate piece crafted in praise of the spirit of a woman in a forest. Pandit Vishnu Narayan Bhatkhande (1860–1936), an Indian musicologist who wrote the first modern treatise on Hindustani classical music, an art which had been propagated earlier for a few centuries mostly through oral traditions first codified it. Walter Kaufmann (1907–1984), the legendary Bohemian musicologist, composer and authority on Indian classical music, further defined raga Todi‘s intended rasa, which is a (desired) sentiment or emotion (to be) evoked in each member of the audience by the art – in this case – of performing the Raga Todi.

“Todi is nearly always shown as a gentle, beautiful woman, holding a veena and standing in a lovely green forest, surrounded by deer.” Kaufmann cites the Sangita-Darpana “With a fair erect body like the white lotus, and delicate like the gleaming dew drop, Todi holds the veena and provides fun and frolic to the deer deep in the forest. Her body is anointed with saffron and camphor”. The forest in which this woman finds herself is unforgiving at first, but she and the animals that she is surrounded by overcome and balance is restored followed by a frolicking celebration.

K. Sridhar communicates all of this with exquisite precision. Through his long alap – the statement of the theme – which unfolds with statuesque brilliance he communicates the dramatic tension through virtuoso atmospherics produced by playing with an almost startling pizzicato. His accenting is dynamic and conjures the dramatic tension of shadow and light as if glimpsed in the fabled forest prescribed by the raga. Pandit Sridhar’s Todi is subsumed by a pensive, mournful mood which is then relieved in the drut (faster tempo) part, by a festive piece, possibly to alleviate the heavy pathos in the earlier stages of rendering. The composition is sublimated in the extraordinary high caliber of his artistry and is perfectly moulded to embody the inherent pensive mood before being transmogrified into a wholly festive mood that celebrates the samskara (purificatory rite, so to speak) of this raga.