The recording A Summit in Paris brings together four of the most important musicians in a two important modern styles of music: Créole-Jazz and Gypsy-Jazz – further proof that while Jazz may have been pioneered by the Black musician, it has since become the root of one of the largest and most wondrous tree of music. These are inimitable clarinettist Evan Christopher together with the greatest manouche guitarist since Django Reinhardt, Fapy Lafertin together with the British guitarist Dave Kelbie, one of the great evangelising figures in the European branch of Jazz and Gypsy-Jazz and Sébastien Giradot, a French-Australian contrabassist with an unique voice in Jazz. Their breathtaking repertoire – which we experience on this disc – is an exceptionally vivid and visceral example of what we recognise as a collision of both Créole-Jazz and Gypsy-Jazz. 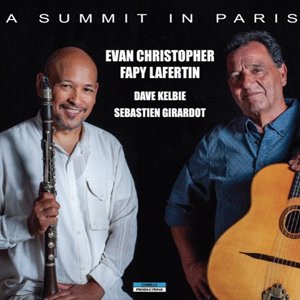 The term créole may have been originally used by French settlers in Louisiana but the diaspora of créolite peoples is much more diverse. A term (expanded from the word) the term Créoles de la Louisiane used to distinguish French settlers born in “The New World” from those born in France and Criollos de Luisiana to refer to those of Spanish origin. Soon (after the Haitian Revolution of 1791-1804) thousands of refugees (both whites and free people of color from Saint-Domingue (affranchis or gens de couleur libres) arrived in New Orleans. Germans and Italians also feature in the mix, as well as the pervasive influence of the Indigenous American; all of whose cultures contributed to the strong tradition of marching bands as well as other traditional music.

The spark that ignited the music of New Orleans came from the African population of Louisiana. The near-mythical collisions of Sundays in Congo Square in New Orleans gave rise to the Blues and begat Jazz. But the strong créole influence throughout the region gave rise to a style now called zydeco and this Gumbo of New Orleans music informed the music of the earliest pioneers; Jelly Roll Morton, Sidney Bechet, Kid Ory, Barney Bigard, Danny Barker, Albert Nicholas, and Pops Foster, to name a few.

The incomparable Evan Christopher comes from the long line of maverick clarinettists that also included perhaps the greatest of these pioneering clarinettists: George Lewis, Albert Nicholas and Sidney Bechet. The latter (who switched to soprano later on in his career) moved to France and was one of the first musicians to carry the Gospel of Jazz overseas, becoming one of its greatest evangelists. It was evangelists such as Mr Bechet that deeply influenced the music of Django Reinhardt – himself a pioneer (along with Pioto Limberger) of what has now become accepted as the European root of the music called Gypsy-Jazz. For his part, Fapy Lafertin is considered to be a direct descendent of Mr Reinhardt and is – with Vivi Limberger, Koen De Kauter, the prodigious Biréli Lagrène and Mozes Rosenberg – the greatest exponent of the so-called Gypsy-Jazz.

Paris would be one of the most appropriate cities for a collision of Créole-Jazz and Gypsy-Jazz and the recording A Summit in Paris has captured just that for all time in a superbly executed (both musically and technically musically) and invaluable document. It is also one of the most breathtaking displays of musicianship on the part of each of the artists on disc. Documentarily, this repertoire represents a perfect storm of how Jazz exploded in the pressure-cooker of early 20th century music that rained down on the broader universe of music. The quartet interprets such classic songs as “Wild Man Blues” and “Swing That Music” written by Louis Armstrong and “Bechet’s Fantasy” and “Little Creole Fantasy” by Sidney Bechet. This is music that was created – and characterises – the shuffling, swinging effervescence earliest days of the Jazz.

Mr Christopher’s playing on his own compositions especially “Old Sober March”, a superb reflection of the music of his beloved New Orleans, is gloriously vivid. His phrases float luminously over the guitar of the Mr Lafertin, who employs spiky, syncopated rhythms and an abundance of ostinati, both coming together to create airiness and a feeling of enormous space and nearly indescribable beauty. Mr Christopher’s playing is brilliant and persuasive throughout – completely unique among clarinet players including among such virtuosos as disparate in style as Eddie Daniels is from Paquito D’Rivera. Mr Lafertin’s lines are beautifully florid, clean-coloured, deeply imaginative and theatrical. For a special treat you might listen to the brief but brilliant “Cinzano”, a work composed by Mr Lafertin (no less).

The playing of both Dave Kelbie and Sébastien Giradot – rhythm guitarist and contrabassist – is sparkling and idiomatic. Mr Kelbie is probably the only guitarist playing today who makes the drummer completely unnecessary (something that I suspect goes way beyond small ensemble like this one). His sense of time is flawless. But what he also does – and this is something that’s often overlooked because of his ability to play “perfect time” is how he mixes up his harmonics, alternating between familiar and unfamiliar and diabolically difficult ones, dropping them unexpectedly into very dissonant passages, making them sound so fresh and new. And Sébastien Giradot does likewise with his contrabass lines. Together, the two men seem to even obviate the necessity of piano in an ensemble. In fact it’s hard to imagine an ensemble without these two men completing there to close the musical circle.

Playing together as they do it’s hard to recall a better recording in recent memory with music played so eloquently and exquisitely as to convey the dynamic and fluid inner pulse of both Créole-Jazz and Gypsy-Jazz – characteristics that, in fact, inform all of Jazz itself.