The music of Devin Gray – in particular his work with these artists who have brought the music of his (now) two Rataplan discs to fruition explores the contrasting personalities of winds and horn, and the propulsive contrabass and drums; the former set of instruments effusively emotional (representing, if you will, psychological time) and the second set (representing, by contrast) chronological time. However, every so often during this set on Dirigo Rataplan II the two groups seem to switch roles and both forms of expression become a model of the character drama that forms the basis of Devin Gray’s maturing music. 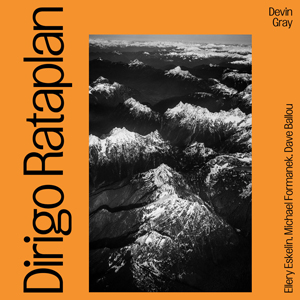 Complexes of simultaneous musical events constitute the most arresting and challenging feature of this music . While one instrument (the tenor saxophone of Ellery Eskelin, for example) may accelerate to vanishing point, the other (Dave Ballou’s horn) slows to immobility. The effusive lyricism of both (woodwind and horn) may be set against complex metronomic pulses from the low rumble of Michael Formanek’s bass and Devin Gray’s often ceaselessly yammering drums so that together as many as four independent streams can run parallel. This multi-dimensional approach is expounded through the repertoire of Dirigo Rataplan II but nowhere more dramatically striking than in “The Wire”.

Mr Gray’s viscerally exciting music – both composed and freely improvised – is also vividly exemplified on “Quantum Cryptology” in which the music composed out of confrontations between the different instruments, each one having its own way of behaving, rather like the different characters in an operatic ensemble, though with very different musical effect. Often during the repertoire, where trumpet is engaged in a conversation with the drums before the others chip in, the music divides the instruments into two duos, each playing different tempi – so that, in effect, there may actually seem as if there are two separate pieces running simultaneously from beginning to end.

The members of this band, now with the erudite musical hindsight of two Dirigo Rataplan excursions, play with unique and palpable authority. They strike the best balance between muscularity and lyricism, which in the case of this music is such an attractively unique feature of Mr Gray’s creations for this improvising quartet.