The music of story and song has no perceptual beginning – and it will have no end. Not, that is, until the seemingly unending tribe of musical artists give up the ghost. From the first raw cry of the human voice discovered to myriad epiphanies of ingenious vocalastics and instrumentalism, the language of music is a seamless part of human history.

All music traverses the spectrum of sound inhabited between the wail of pain and shout of joy, singing, ultimately of the triumph of life and the silent communion with its Creator, who blesses the generations chosen to sing this triumph of life. Men and women blest with this gift may practice their chops endlessly – virtually from birth to death – until the instrument becomes the musician and the musician becomes the song.

Great musicians… A breed apart. Chosen. Driven. When you listen to ‘their call’; when you hear them raise the Spirit in the art of music there is no denying their song of songs. Musicians, as Charles Mingus discovered, were vessels of the greater calling of God. Thus their compositions – of sounds and intervals, written, or suggested, sketched and colored, with a multiplicity of textured harmony and complex and tempi, are all created by divine intervention, if only to celebrate the pain and joy of human endeavor. All else is rigorous practice until the perfection of technique becomes fused into the composition. Until the instrument becomes the musician’s own voice and the echo of every moan and groan. And every apocalyptic shout of joy.

Music was once simple and might have always been this way had man not learned that there were those who were different. Babel struck and we awoke, after centuries of migrations, there to find that some were white and others black and brown and yellow. The strong snuffed out the weak. ‘It was by the sun’, no less! We heard it sung in the Song of Songs. But few believed, yet we knew that what we thought radically different to look at and hear was beautiful too! Even though we did not see it in each other. The paradigm, of course, is: Were we inside these ghettos, looking out, or outside looking in? No matter, we still were brothers and sisters. Bound by disaffection, we invented a new language to express our joy at being in pain, blest with the ability to find joy in the muck of negritude. And the black and blues begat jazz!

Meanwhile ghettoism became the global norm as the proud tribe of black and brown and yellow struggled onwards. And even though men like Dr. King – and Gandhi before him – had that dream of rising up and being free this would never be, except – as it turned out – constitutionally. But in a retrograde world, servitude lives on insidiously. This is why the Underground Railroad – the Soul Train – is born again. Perhaps it never really died or faded away! And, wonder of wonders, its riders are of every hue. Yes, black, brown – and white too! Modern civilization has swelled the ranks of the dispossessed. And the Underground Railroad continues to run, of necessity, even today. It was ghostly, invisible then, but as it carries it’s dispossessed forward to a higher ground today, we hear its song. It is born of the same primeval rhythm that first woke us up in the Great Rift Valley; of blue psalms enjoined in the cry of freedom. Ah… Jazz! 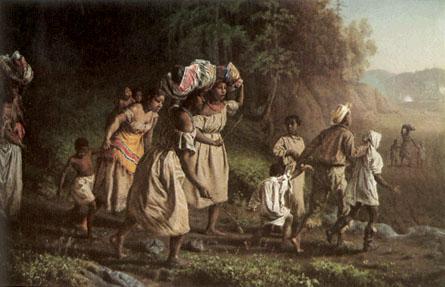 So, who else, but the artist-musician can keep us alive on our journey to liberation? This urban griot – the artist-musician – who sings our sorrows away, only to be supplanted with the joy of man’s desire? Dispossessed, yet full of hope, as they send the soul soaring. They have never been patronized as the artist-musicians of the renaissance Europe were. Mostly exploited and uselessly categorized, they are. Rarely understood and much less appreciated except by those who know and believe. Their souls shine like celestial spotlights above our civilization. There are elders, who set the first stories of our lives to song: Duke, Bird, Mingus, Monk and ‘Trane… They riveted us all – travelers on the Soul Train – with beautiful stories in song, in praise of human endeavor, then colored them with a palette rich in spiritualism with voices soaring as they lead us on this inevitable journey. With their muted wails and apocalyptic shouts, heard around the world, they unwittingly began to change the world – at least that small world that drew us in with its sensuous rhythm!

We continue to listen as the musical descendants of Duke and Bird, Mingus, Monk and ‘Trane continue to revolutionize the art of music, sometimes playful, sometimes serious… sometimes with elemental sadness and almost always with deep spiritualism that never fails to raise body and soul in a dance of joy!