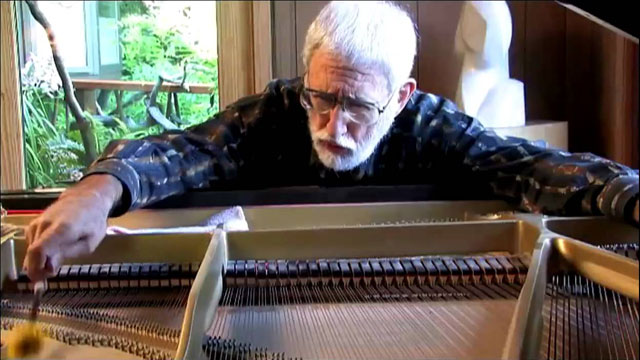 On Disc 2 of this priceless set, there is more tantalizing deconstruction of standards. Mr. Zeitlin seems the revel in this when he approaches a standard. On “We’ll Be Together Again,” the new changes are very subtle, hidden in the gently swaying rhythm, with just the occasional flurry of fingers in the second chorus. “Once Upon a Summertime” is a redefinition of modern romanticism. The almost somnambulant pace at which the song begins is deceptively challenging in the way that Glenn Gould’s famous interpretation of Brahms D Minor Concerto. But summertime can be languorous, so Denny Zeitlin basks in its glory, soaks in the heat of the song and reflects the sense wonder almost that Ray Bradbury wrote of in Fahrenheit 541. And then there is the extraordinary song “The Boy Next Door,” with its semi-tonal shifts and astounding melodic statements verse after verse… 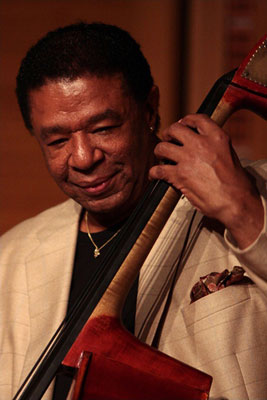 But sandwiched in between the two standards is the title track of this 1964 record—“Carnival”. This is an incredible exercise in program music. It begins at a blistering pace and then settles into an intense, evocative study of the almost Bacchanalian aspects of a carnival. The forays into atonality and rhythmic fibrillation are symptomatic of Mr. Zeitlin’s unusual vision that emerges from his own compositions. Total freedom in Gigi Gryce’s “Minority” again… Somehow I sense a hidden, refracted rhythm inside Zeitlin’s head. It emerges is in his interpretation of Mr. Gryce’s “Minority” and more so in a longer Denny Zeitlin composition, “Labyrinth”.

The bountiful energy of “Cathexis”

I return to Disc 1. Thelonious Monk once said that Denny Zeitlin reminded him (once) of Tadd Dameron. So I listening to avoid Mr. Dameron for now and slip in Denny Zeitlin’s first trio record from earlier in 1964, Cathexis, a record trio record Mr. Zeitlin made with Cecil McBee on bass and Freddie Waits on drums. This was the first time—February of 1964—that Mr. Zeitlin was able to record his own compositions. It is now impossible to avoid the other aspect of Denny Zeitlin’s life—his practice in psychiatric medicine. At that time, however, he was just beginning his studies. But consider the title of his first record Cathexis. Not Latin, but an English translation of the German word, “besetzung,” a word that Sigmund Freud first used and which is known to describe “the amount of psychic energy which is directed toward or attached to the mental representative of a person or thing.” The suggestion is brimful with a dynamic tension so great that the suggestion is almost explosive. 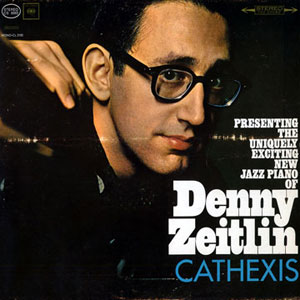 Then Mr. Zeitlin sits down to play. “Repeat,” the opening song on the record is simple enough, yet has a mesmerizing melodic energy and a superb riff that breaks up the two bopping segments. The energy is palpable, but it gets more urgent by the time I get to “Stonehenge,” the C-minor modal piece describing the ancient burial grounds of wizards on the Salisbury Plains in England. There is a racy motif that runs through the song, exploding in parts, egging Cecil McBee on while Freddie Waits chips away at snare and cymbals. This boundless energy catches fire on the title song, “Cathexis”. Although it is easy to confuse this piece—played at great speed—as bebop, it really is not. It is the first time I come face to face with Mr. Zeitlin’s musical raison d’être. It is as if he inhabits the known universe of the song—its melody, harmonic and rhythmic variations—and a parallel universe of pure energy that drives the heart and soul of the song, independent of the sounds stated and implied. It is that invisible wave-form that chases the song, running parallel and mimicking its every twist and turn. 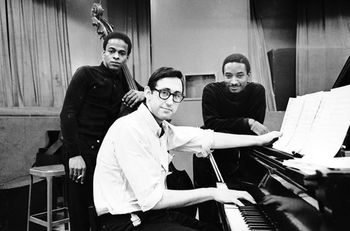 On “Blue Phoenix” Mr. Zeitlin brings this unique technique to fruition especially in the first section of the piece, where the pianist is heard alone for five minutes and four seconds, shaping the song drawing its melodic lines adding rich harmonic colors and textures with his electrifying left hand. Cecil McBee and Freddie Waits join him in the second part of the song as it develops its blues, an elementally sad section perhaps describing the sunset of the life of the mythical Egyptian bird that is about to nest and die… Mr. McBee’s solo at the end of this part of the song, although pizzicato, is ruminative and almost dirge like and here begins the reliving of the myth… The pace of the song picks up as if fanning the fire that is consuming the Phoenix, until at about two minutes into Part 3 of the song, bass and drums vanish into thin air and Mr. Zeitlin takes over again… using fingers, thumbs in a an all-out two handed assault he fans flames and twirls the song around until it draws in bass and drums resurrecting the original melodic line of the “Blue Phoenix,” which proverbially begins its resurrection.

I cannot get enough of Disc 1. It is hard not to lose my breath when I hear the two Gershwin songs, “Soon” and “I Got Rhythm”… the latter is probably the most definitive version I have in my library (Gershwin’s excluded). But what a straight one… and herein lies the surprise… Or was Denny Zeitlin merely composing himself like that Phoenix?