The pianist Denny Zeitlin uses the word “electro-acoustic” to describe the kind of experimentation and improvisation he has come to indulge in with a long-time musical partner, the drummer and percussion colourist, George Marsh. But of the three recordings he has made in this vein – Riding The Moment [2015] and Expedition [2017], this 2021 production entitled Telepathy will go down, arguably, as the duo’s most ambitious – and successful – for reasons that have everything to do with “experimentation” and “improvisation”. Although all of the music created by this duo has been on the knife-edge of both [those] aspects of music none of what we have heard before sounds as “in the moment” as the repertoire on this disc. 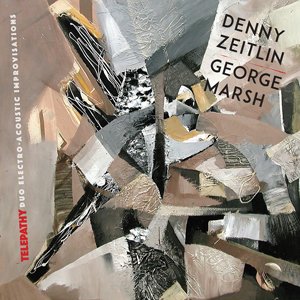 To begin with Mr Zeitlin is one of just three or four musicians] who have pushed electronic instruments – synthesizers and [analogue and digital] keyboards – much further since the British musician Keith Emerson first declared Robert Moog’s seminal Synthesizer to be a limitless repository of sound. While it may be true that Wendy Carlos and her Switched on Bach, and the work of Rick Wakeman also pushed the boundaries of electronic instrument far beyond what Karlheinz Stockhausen, Olivier Messiaen, John Cage [and others] had set for the range [for by now, an impressive array of synthesizers were now accessible to musicians] of instruments, it is only relatively recently that Mr Emerson’s singular Moog Wall has come to be a series of small and large keyboards [behind and] in whose sonic world the musician is often lost. However, few have created so much invention as Josef Zawinul, Herbie Hancock, Lyle Mays and Ralph Towner.

Denny Zeitlin gave early notice of his proclivity for the alternate sonic world that this instrument [or range of instruments] offered when he created atmospheric music for [the remake of] the film Invasion of the Body Snatchers. However it is Mr Marsh [who was also along for the ride] who has been the enabler for Mr Zeitlin’s most impressive wall of rhythm. And there is a long – perhaps wildly elliptical – line from there to Telepathy. Moreover, as the title itself aptly describes the musical process, the musical interaction between these two musicians is at the furthest point in the arc of their creativity.

Mr Zeitlin tells us in the CD notes that these are first-takes [and even where overdubbing was called for, the dubs were “first” passes or musical events created and captured in the moment. None of this even begins the describe the seemingly symphonic nature of the music produced by a mere duo, which in actuality sounds as if it were a whole crashing orchestra. When this is put together with the fact that all of this music with “improvised” as if by Telepathy you will have come to experience the true impact of this extraordinary music.

Whether it is experiencing “Highlands” – music evocative of the rarefied air of mountain ranges that reach for the sky – or the darting phrases of “Quicksilver” that sound as if the music has been created in the laboratory of the musical alchemists [that these musicians clearly are]; whether you are seduced and sucked by [and into] the proverbial force and physicality of “Black Hole”, or find yourself storm-tossed on the breakers of a Homeric “Odyssey”, or lost in the labyrinthine insanity of “Maze”, you will find these works quite magical in ways that you probably never thought music – certainly “electro-acoustic” music – could ever be.

There are also two other things about this recording worth noting: the first is that Mr Zeitlin’s sweeping manner of pianism on the grand piano is ever-present in the “acoustic” aspects of this music. The second – and probably more significant aspect of this recording – is [at least in my view] that, despite Mr Zeitlin’s obvious genius, it would not be the undertaking that it has turned out to be without Mr Marsh. His mastery of harmonic and rhythmic colour is palpable throughout and as often as not he plays a key role in shaping the movement of this music; enabling Mr Zeitlin to take it to places where he may never have got to without the drummer by his side.