Home Imperatives Remembering Charlie Watts for the music he played

Charlie Watts: Meets The Danish Radio Big Band* Clearly nothing about the music Charlie Watts played outside his regular job is anything remotely resembling “conventional”. In fact, even the music by his mates Jagger and Richards, which he interpreted outside of that charmed regular gig does fly in the face of reason, yet succeeds magnificently and – in the case of this recording where Mr Watts Meets The Danish Radio Big Band – does really stand convention on its head. Incandescent, profoundly human and intoxicating in its celebration of the force of nature and of a near-supernatural being – I mean, of course Elvin Jones – is demanding of performers (including himself) and requires special treatment by all concerned, which it duly receives on Parts 1 and 2 of Mr Watts’ glorious “Elvin Suite”.

Not only does the ear-splitting barrage of drumming by Charlie Watts bring the spirit of Elvin Jones to life as if by a reverential stroking of the magic lamp, but Uffe Markussen’s steaming tenor saxophone solo on part two of the suite succeeds superbly in focussing on the life-affirming qualities of the work that Joe Farrell brought to Elvin Jones bands post-John Coltrane. The pleas of the principal character in “[Satis]Faction” sound more plaintively urgent and less laden with undue machismo, a nice turn on the Rolling Stones original. However, despite the fact that Mr Watts includes two more 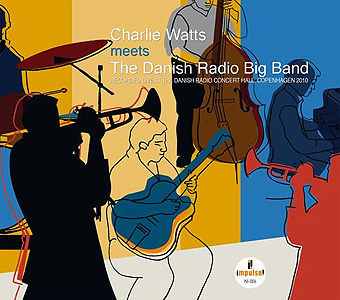 Keith Richards and Mick Jagger originals – “You Can’t Always Get What You Want” and “Paint It Black”, this is not an attempt to turn the Rolling Stones music into jazzy, big band incarnations; but rather to give Charlie Watts voice. Again…

It’s hard not to speak of Charlie Watts in the same breath as drummers such as Mel Lewis (although a very poorly educated and woefully unformed critic who shall remain unnamed has called him “overrated”). After all Mr Watts is a virtuoso on his chosen instrument blessed with impeccable taste and more than perfect time, something that is always at the forefront of his playing – ensemble and solo – because of his choice of notes, played with such breathtaking percussive colourations that he seems to paint rather than play on/with the drums. Notice the use of percussion palette (and changes) as Charlie Watts leads the Danish Radio Big Band from “I Should Care” into a series of odd/even-metred staccato phrases into “You Can’t Always Get What You Want” and then, masterfully into the darkened melancholia of “Paint It Black”.

Joe Newman’s “Molasses”, a heavy, strutting blues, brings what seems like an oddly short session (it is, after all almost an hour long record) to a close. The piece is remarkable: beautifully shaped by soloists – one and all, and, of course, Charlie Watts in a duet setting with The Danish Radio Big Band’s drummer Søren Frost – and conductor Gerald Presencer with a captivatingly operatic sense of timing. Mr. Presencer is also responsible almost all of the music (not “Molasses”, however,) and also the masterful flugelhorn solos on “You Can’t Always Get What You Want” and “Paint It Black”. All of the soloists from The Danish Radio Big Band provide absolutely flawless accounts of their musicianship throughout as does Charlie Watts himself, who shows that he excels especially in these rich orchestral tapestries of this big band.