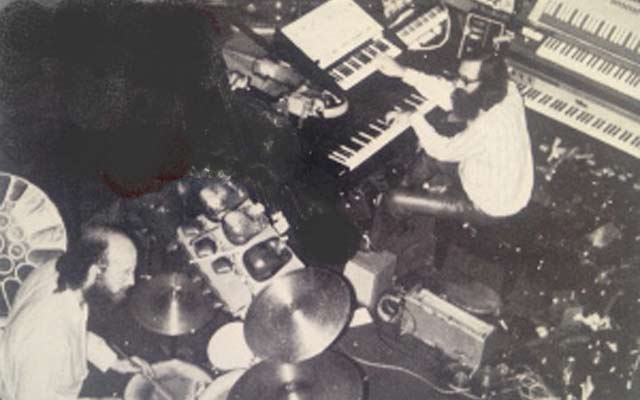 Recordings by Denny Zeitlin on a myriad of instruments—both acoustic and electric—while not being common, are not new either. So another recording on acoustic piano, keyboards, synthesizers and other hardware should not be construed as ‘jumping on the bandwagon’. Mr. Zeitlin has several iconic recordings including one going back a few decades using this kind of instrumentation. He has also, happily, performed and recorded with the iconoclastic drummer and percussionist George Marsh. And yet it’s not simply a case of Denny Zeitlin’s—among other things—diatonic harmonies melding in with the rhythmic language of George Marsh at work on Riding The Moment. 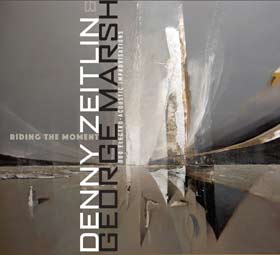 This is no virtual embrace of these two musical linguists is much more than two-note and four-note patterns, block chords and impossible runs and arpeggios battering transitive and intransitive rhythmic lines, whorls and dizzying ascensions and death-defying plummeting to incredible depths. It is a veritable tapestry of melody, harmony and rhythm that makes for a complete transformation of musical foundations into a diaphanous, living, breathing and palpitating fabric of music, impossible not to react to. Here, then is where the softer, rounder qualities of determinate and indeterminate pitch add expressive depth to the tintinnabulation and ubiquitous chatter of Mr. Marsh’s drums.

What a glorious partnership this is. Neither musician pushes the music around too much, playing with extraordinary restraint and respect for each other’s ideas whether they be joyful, sorrowful or even sometimes dark and sinister. Colours are freely exchanged in a moving palette that each instrumental genius dips into and then with a flourish, swishes the proverbial brush onto the canvas that seems to assume a myriad of shapes and colours. Each song, for example: “Fermenting”, “Vortex” and “Gears” is a veritable metamorphosis cycle in itself. This is not to mention the shape-shifting nature of other tracks on the album. The playing, however eccentric, is never experimental. Nothing is lost either in intensity, or clarity, or even focus.

The orchestral, theatrical voices of Denny Zeitlin’s instruments often become the undercoat for the tuned vocalastics of the reverberant drums. At other times the favour is returned, when the translucent percussion acts as a veil-like—and at times when only the whispering of the cymbals is barely audible—a chiffon-like net onto which the plucked and hammered notes of the keyboards falls like so much mountain dew that gathers itself into a glacial sheet of music that permeates that net created by the percussion. Listen to “Down The Rabbit Hole” and you will hear what I hear as the music becomes something spectral before your ears.

Are the musicians paying homage to Gérard Grisey, Jonathan Harvey or Kaijo Saariaho? This we will never know. But even if the doffing of the axiomatic hats suggest that this is purely accidental, the ghostly, euphonious textures and edgy vitality that has made spectralism and its adjuncts a musical force to be reckoned with, so also is the music on this record. It is also abundantly characterful, polished to a fault and always good to hear, while being more varied and challenging repertory.

Denny Zeitlin has recorded over thirty critically acclaimed albums; twice won first place in the Down Beat International Jazz Critics Poll; written original music for Sesame Street; and appeared on network TV, including repeats on the Tonight Show, and CBS Sunday Morning. Zeitlin’s lecture-demonstration “Unlocking the Creative Impulse: The Psychology of Improvisation” has been presented across the U.S. and in Europe. Read more…

At fifteen George Marsh became a professional drummer in Belleville, Illinois. His early experiences included work with Sam Andria, Jimmy Williams, and Barbara Streisand (before she became a super star). He studied percussion with Tom Siwe and Jack McKenzie at Champagne-Urbana, and later played with the Lyric Opera, The Chicago Contemporary Chamber Players and many great Chicago jazz musicians. Read more…