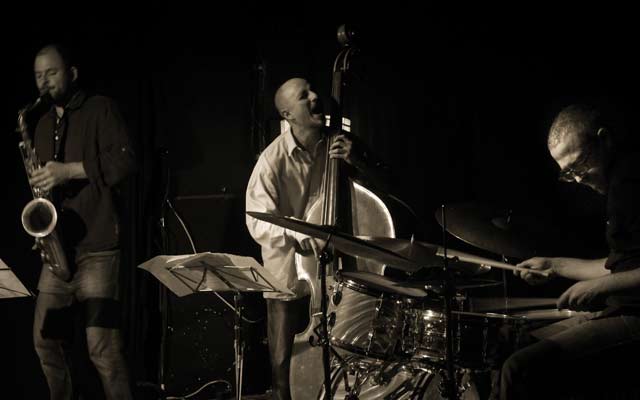 Word is beginning to get around that the Christoph Irniger Trio’s Octopus should be on the shortlist for anyone wondering where to make a start with his impressive music before going back to the earlier, 2012 album, or his other recordings outside of this trio. This music was recorded in the winter of last year and has something of a lacerating quality of a masterpiece. The music also shows Mr. Irniger to have a remarkable quality for dodging the obvious just when it seems that the music might get predictable. To do so he and his trio find inspiration in the most unlikely places, drawing attention away from the individual instruments and replacing that with a delightful ensemble sound that is full of energetic excitement, brilliance and the genuine avant-garde spirit. 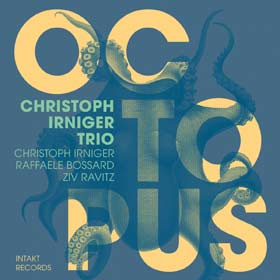 Octopus might suggest a larger group for what has been written, but this trio does something amazing with the music turning it into an elaborate sonorous series of songs that are notable for attractive melodies, extraordinary harmonic and rhythmic grace and continual inventiveness. This is brave music bucking convention played with fervor that is greatly superior to much of the so-called new new-thing that is being bandied about as, well, the new-thing, when in actual fact most of what even virtuoso musicians regurgitate from the work of recently passed masters. Here, however, the musicians show undimmed enthusiasm and wholehearted commitment to projecting the unique character of each song and articulating the shape of every phrase—whether played by saxophone, bass or drums.

I have been duly impressed with the whole repertory, but have a few favourites. “Ocean Avenue” is one of them. I like it because it has something of a deceptive quality to it. What might seem to me mundane accompaniment figures in the ensemble movements, for instance, have an expressive nuance that gives positive support of the solo lines. Other favourites are “Octopus” and more than anything “Dancin’ Structure”. The latter piece belies a streak of humour in the writing of Christoph Irniger. He does not shy away from what might be construed as musical slapstick; raw, almost comical stuff that appears to mock even the musicians who play the particular music. I find this a refreshing aspect of this album and of all of what I have heard of Mr. Irniger’s work.

Again, Christoph Irniger plays his tenor saxophone as if it were gilt-edged. And this not only suggests pricelessness, but beauty of tone, purity of tuning and lively variety of articulation. And where necessary his melodic decorations (in the slower central movements of the pieces) give a delightfully unforced spontaneous impression. His performances also take a few liberties especially when the melodies appear to charge full steam ahead but then with repeated chord patterns is extended backwards, providing the bassist ‘room’ to make for what in classical music might be termed basso continuo, except that in this instance it is of a slightly more rollicking kind.

At its most tuneful and engaging the album finds no peers. And this enhances the attractiveness of the music for someone who might have come to the music of Christoph Irniger rather late in the proceedings.

After the acclaimed album ‘Gowanus Canal’ in 2012, ‘Octopus’ is Christoph Irniger’s second release with his trio of Raffaele Bossard (double bass) and Ziv Ravitz (drums) on Intakt Records. Irniger is a master of orchestration and rejects the hierarchy of soloist-plus-rhythm. Instead of using the compositions as springboards for solos, he finds interesting ways for the improvisations to underline the compositional characteristics. Read more…