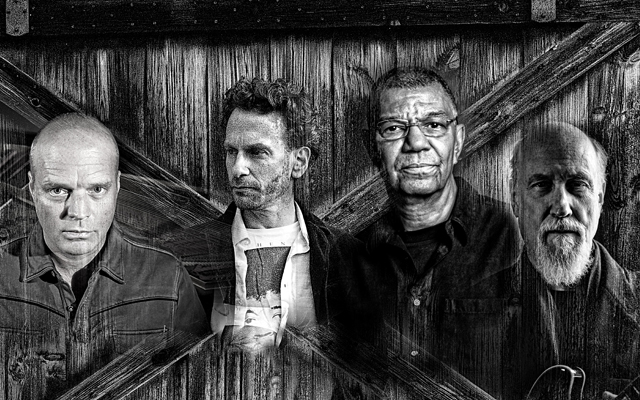 Over the years all of these musicians have (individually) made music that is to be enjoyed in the purest, loftiest, subtlest part of the soul. But together might have another prospect. Fortunately in their respective incarnations in this supergroup might there is the absolute denial of the Ego. Consequently this music by (and on) Hudson has turned out to be something truly special. It’s not hard to understand why. In letting the music leap to each new bar of notes and rests, improvisation upon composition, each of the musicians: drummer Jack DeJohnette, bassist Larry Grenadier, pianist, organist and keyboards specialist John Medeski and guitarist John Scofield have given heroically of themselves; this to the extent that Hudson is an unending flow of music that is rich, opulent, dramatic, and unstoppably eloquent.

One gets the impression that this is a project led by Jack DeJohnette and Motéma have helped the doyen of the drums celebrate his 75th birthday by bringing Mr DeJohnette together with Mr Grenadier, Mr Medeski and Mr Scofield in the studio and then set them free to go where the heart beats. In their hands each of the works here – especially “Lay Lady Lay, “Woodstock”, and “Hard Rain’s A-Gonna Fall” – is an eventful and emotionally eloquent journey. But the group really takes wing on the brilliant “Dirty Ground” reaching a peak of triumph in the spiritual fervour of

the ascending “Great Spirit Peace Chant”, which calls to mind the marvelous music that Jack DeJohnette made on Music For The Fifth World (Manhattan, 1993). However, lest it seem that Mr DeJohnette is titan-in-chief here, let’s be clear that this is not true.

Larry Grenadier, John Medeski and John Scofield are all equally spectacular, persuasive on their respective instruments and characteristically and touchingly elegiac in each of their soli. Mr Grenadier one of music’s most gifted bassists is also explosive on “Tony Then Jack”. Such is his dazzling technique, and without ever selling the emotional intensity of the music short he never overshadows his colleagues, who in turn realise every colour and expressive import of that song – and, I might add – the one following: “Up On Cripple Creek”. Meanwhile the wonderful song by the iconic Robbie Robertson also receives a performance of striking panache from Mr Scofield and Mr Medeski, and Mr. DeJohnette and Mr Grenadier as well.

Both guitarist and keyboards specialist, together with Mr DeJohnette and Mr Grenadier of course, continue to give of themselves as if this were their lives depended on it and so the performance on Hudson is alternately gutsy, subtle, and completely riveting. The repertoire has been superbly arranged so that we begin in the future (so to speak) with (the song) “Hudson” and journey through Americana of the 20th and 21st centuries – through darkness to light – so that the reverential “Great Spirit Peace Chant” at the end of the disc seems to look back from this exciting future not only drawing from the past, but also drawing that very past into the ever-hopeful future, putting this music at the heart of the humanity in each of these excellent artists.