Interest in the music of the late 19th/Early 20th Century French composer Erik Satie is relatively rare. Firstly his music was not widely appreciated even in his time; being mostly known to be odd and difficult to sit through, despite the fact his work was admired enough by artists such as Jean Cocteau, his ballet–Parade–was premiered by Serge Diaghilev and the composer could count, among his other followers, contemporaries such as Georges Auric, Francis Poulenc and even Darius Milhaud. Mr. Satie’s work was a precursor to such artistic movements as minimalism, repetitive music and the Theatre of the Absurd. His music and ideas also collided with Dadaism, although it may not have influenced or been influenced by that movement. Despite his lonely path as a musician, his compositions have prevailed and later composers of repute have helped renew interest in his work. One of the earliest was Frank Zappa, who shared many of his influences and interests. Recently there has also been the multi-reeds player Dan Willis, who has recorded an extraordinary album The Satie Project (Daywood, 2010). Mr. Willis followed that album up with another astounding album, The Satie Project II. 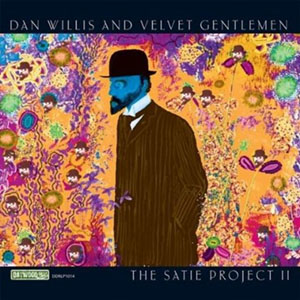 While the first album focussed mainly on adaptations and re-imaginations of Erik Satie’s celebrated compositions the First, Second and Third “Gymnopedies,” as well as his “Nocturnes,” the “Idylles” “Meditation” and two of the “Gnossiennes,” the new album relooks at the latter compositions of the early 20th Century composer in greater detail as well as opens up Mr. Satie’s “Pieces Froide” and “Vexations”. Most of Erik Satie’s work has a wonderful sense of mystery; what is most striking about his compositions, is, however, their majestic sense of tone and instrumental texture. Mr. Satie seemed to delight in portrayal of the purity of tone through explicit musical notation. But in doing so he also imparted to his musical notes a mysterious spectral quality. Listening to Erik Satie’s music the sense of ghostly dimensions to the notes and the textural values—through the timbre of the instruments, usually hammered—becomes almost palpable. This remarkable quality is retained throughout Dan Willis’ wonderful album.

Something that Mr. Willis does is to give Mr. Satie’s music in the contemporary setting, transcribed, as he does the music, to the sonic topography of his horns, as well as the guitar as well as drums. This enables Mr. Willis to bring a quite remarkable new dimension to the music of Erik Satie. Here Mr. Willis is bold in his re-imagining of the music of the “Gnossiennes”—even irreverent (when compared to someone like Frank Zappa, who was more conservative in that he tended to preserve the integrity of the compositions rather as Mr. Satie would have them). However, Dan Willis’ musical odyssey is, by its very nature, audacious. He presents Mr. Satie music on his horns. Textures take a tumble; timbres are brazen and burnished while navigating all of Mr. Satie’s melancholia and dissonances with broad gurgles and quirky counterpoint. The compositions that may have alluded to what the Greeks referred to as “gnosis/knowledge” becomes a spectacular rediscovery of what it is to “know” the timbre and texture, and the tonal grandeur of Mr. Satie’s notes once again. In this regard, “Gnossienne 5” is probably the most beautiful.

Dan Willis even goes many steps further in his interpretations of “Vexations,” a composition with a theme in the bass with accompanying chords written with exotically eccentric; even weird enharmonic notations. With the use of horns and Hammond B3, the dramaturgy of this delightful composition is heightened almost to the point of ecstasy. The simplicity and charm of the “Pieces Froides” is reminiscent of Erik Satie’s early music. Composed in 1897, the music here is an utterly beautiful combination of spare melodic lines, linear textures and repeated figures in the bass lines. Mr. Willis transforms these pieces into a breathtaking excursion for his horns, percussion and bass, multiplying the beauty of the originals in an almost unexpected and magical manner.

In the end Dan Willis succeeds not only in revisiting important and beautiful work by Erik Satie and engaging in a new examination of its historical importance, but also in putting the music of this all-but-forgotten master in the brand new, contemporary orchestral context of an altogether new idiom: that of jazz.