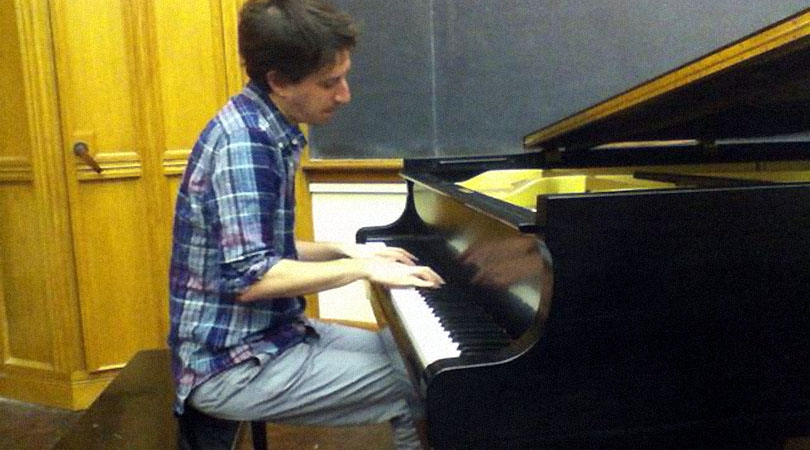 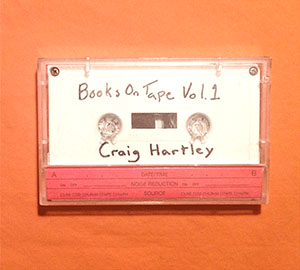 There is something to be said about an artist arriving at a sense of musical maturation. There is fear in his voice; and excitement. There is a certain urgency in his playing—not the kind that rushes everything he does, but like a horse newly fitted out with its accoutrements, a restless chaffing at the bit. The field is wide open and the horizon is nowhere in sight. This is where the pianist Craig Hartley finds himself on his extraordinary debut record, Books on Tape Vol. 1 His arms hold taut muscles. Elbows extended he wills his hands and fingers to capture the unbridled excitement that fills his febrile mind. This is filled with ideas; wild ideas about music that might challenge even the experienced musician. And yet Mr. Hartley is at ease with all of this, which is why the music seems to flow—albeit spiritedly—guided by steady hands that contain the vacant rushes and unleash the impulses to adorn. In this endeavour, Mr. Hartley receives excellent support from virtuoso bassist Carlo De Rosa and the very special drummer Henry Cole. On the tracks on which the talented trumpeter Fabio Mogera appears, he embellishes the tone of the music with a burnished glow and when Dida Pelled steps up to the microphone to sing a wistful melancholia fills the air for it has to be said that Ms. Pelled is one of the most breathtaking vocalists making waves today.

Mr. Hartley’s music is heartbreakingly beautiful. It seems that he experiences it with his whole body, which must, of course, mean that he is made entirely of music. Melodies flow out of his fingers as if they were wired for sound. When the whole of his right hand works in consonance with his left one wondrous harmonies are afoot. And when the fingers of his left hand, exquisitely splayed, skitter across the ivories, the rhythm of a thundering heart makes all of this come alive for the listener. It is one of those perplexing mysteries how music is made, deep in the mind’s eye, where no light shines; and where nothing is said, but where everything that matters is understood. For this is the doorway to the soul. How else could the melancholic metaphors contained in the extraordinary pianism of “My Foolish Heart” be explained? Can they at all be explained? Perhaps the quivering emotions should merely absorbed and enjoyed as the dazzling runs and vaunted arpeggios become the melody, harmony and rhythm of the listener’s heart. Fingers follow fingers; hands cross over hands, chasing harmonic inversions that flee the melody like excited impalas. There have been many versions of Ned Washington’s and Victor Young’s classic piece of music describing the folly of a lover’s heart, but very likely none capturing the emotional vulnerability as heartbreakingly as Craig Hartley’s.

Of his own compositions much may be said, especially of their vivacity; as if they were composed by an artist who could barely control the excitement of the songs as they burst forth from the composer’s heart where they have gathered with equine power to await the awesome echo of the starter’s gun. “Dial 411” is such a song. Despite its blistering speed it comes designed as if by the magic contained in the cloistered magisterium of an artist’s soul. This is true also of the mesmerising, labyrinthine melody and hopscotching rhythm of “K2?”. On this chart, it seems as if it is true: that Mr. Hartley’s hands work independent of each other, going off on their own to make melody and harmony that by deliberate happenstance have been reined in by one mind focussed on making the most exquisite music. Bassist Carlo De Rosa and drummer Henry Cole play no small role in the majestic development of this music. The bassist and the drummer have been moulded into the tune like potters clay and once their improvisations are done a most wondrous work of art emerges. This is also true of Fabio Mogera’s brassy forays into the music which has been arranged for him to play. However, the crowning glory belongs to Dida Pelled and her great interpretation of Mr. Hartley’s extraordinary ballad, “I Should Love You More”. Here lies music for the ages. Craig Hartley has truly written an enduring chart in the grand manner of the Great American Songbook. Time, of course, will tell, but there is every indication that this is a true masterpiece of composition, performed with subtle ingenuity.

There is not a wrong note nor a weak song on this marvelous album. “Books on Tape” features an extraordinary narrative that wends its way through startling melodic twists and turns. “Why Not” is a cleverly written song memorable for the brevity of its melodic architecture, enhanced by the incandescent refraction of Fabio Mogera’s horn; as is the quartet version of “Just For Me,” which is a brooding epic excursion into the melodic territory of Mr. Hartley’s own making; one that also features his flawless pianism. “Froghollow” recalls to mind a place in the imagination where the intricate wonders of music abound.

An album such as this can only be followed by one that is infinitely better; more refined and deeper in every respect that this one. That being said, Books on Tape Vol. 1 is a masterpiece in its own right; worthy of a composer and musician of infinitely more experience than the young Craig Hartley.

Track Listing: Dial 411; My Foolish Heart; Books On Tape; Why Not; K2?; I Should Love You More; Just For Me; Froghollow; Just For Me.

Craig Hartley on the web: craighartley.me