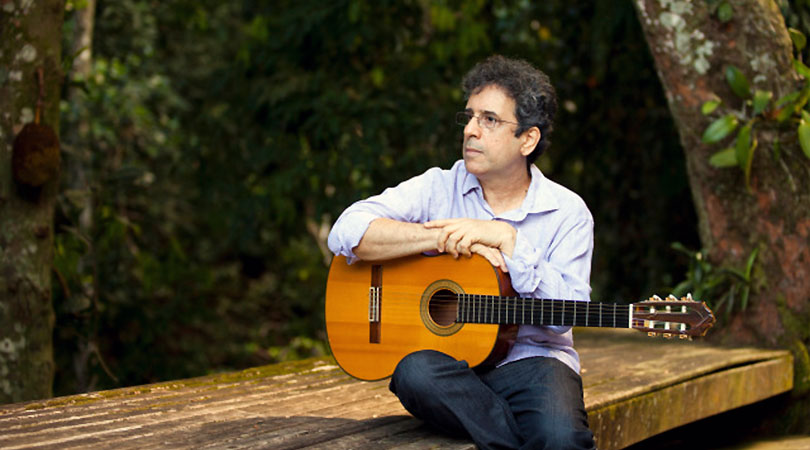 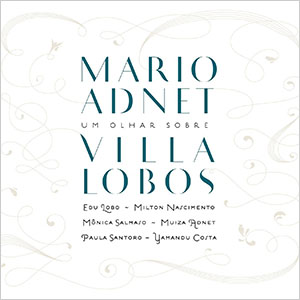 Mario Adnet’s beautiful record, Um Olhar Sobre Villa-Lobos is an important album in the oeuvre of Brasilian—even all of modern music—for two obvious reasons. First it establishes the vivid significance of its honoree, Heitor Villa-Lobos and second, it reveals the continuum of modern Brasilian music in which is woven the incredible fabric of folk music: that of Pixinguinha, Jacob do Bandolim and the modern masters; including Antonio Carlos Jobim and Moacir Santos, Guinga and Egberto Gismonti. But there is more: This continuum must also now include the exquisite work of Mario Adnet himself. For with his album Amazônia—No Trilha da Floresta and now this album, Um Olhar Sobre Villa-Lobos this now establishes beyond doubt that Mario Adnet himself is a part of this continuum of Brasilian music. The latter revelation may be of greater significance as even critical analysts tend to brush the importance of a musical arranger and director aside, whilst focussing on music under review in favor of elevating performances of musicians and the composers themselves. Here, however, there can be no doubt as to who shares the honors: The great Heitor Villa-Lobos, the composer and Mario Adnet, the interpreter and arranger of that music; the proverbial funnel through whom the music flows.

The music on this record pivots on a classic re-imagination of what is perhaps Mr. Villa-Lobos’ most famous composition: “Bachianas Brasileiras”. This is a series of nine suites through which is channeled the baroque harmonic and contrapuntal procedures of Johann Sebastian Bach’s music and classical and folk forms of Brasilian music, co-mingled in a rhythmic and passionate reading of cross-cultural history. This includes one of the most celebrated pieces: the fourth movement from “Bachianas Brasileiras Nº2” “Trenzinho Do Caipira” (“The Little Train of the Caipira”) a veritable polytonal and polyrhythmic passacaglia. Also included are extracts from “Bachianas Brasileiras Nº4” and “Bachianas Brasileiras Nº5” featuring the arias from both 4 and 5 and the exquisite “Dança (Martelo)” from 5, performed by the music of many Brasilian musicians today: the enchanting vocalist Mônica Salmaso.

Opening the heartfelt homage to Heitor Villa-Lobos, Mr. Adnet chose wisely in the graceful valse, “A Menina Das Nuvens” a piece that moves in wide circles pirouetting in graceful and diaphanous, and rhythmic arcs as if on a glazed floor. Mr. Adnet gives notice here that he is not prepared to disassemble or deconstruct Mr. Villa-Lobos’ work, but merely to enhance the wondrous décor of its exquisite rhythms and melodies. The colours and tone textures, and timbres produced by the reeds and horns—especially by the quivering exaltations of Teco Cardoso’s flute, the woody textures of Igor Carvalho’s clarinet and the rumbling baritone saxophone of Henrique Band. The famous “Bachianas Brasileiras” are interspersed with all the rhythmic excitement and playfulness Mr. Villa-Lobos’ beautiful dances and songs—the Canção, Serestas—and Arias that made his music so enduring and beloved by generations of aficionados from the early 20th century, when they were composed, until today. But none is more beautiful than the “Dança (Martelo) – Bachianas Brasileiras Nº5 II Mov.” The beauty of this dance is all the more memorable as it has been graced by the presence of vocalist Mônica Salmaso. Lesser mortals would trip and fall with a difficult composition such as this. It features multiple changes in key and there are no more than a quarter of a measure apart at times. Ms. Salmaso arrives at them with characteristic splendour and leaps into them as if propelled by the flight of a ballerina. Moreover, her vocalisations pirouette in graceful parabolas and leap like excited impalas as she courts the lyrics like a lover entranced. The “Bachianas Brasileiras Nº5” plays a pivotal role in this musical continuum, recalling to mind the extraordinary world of music inhabited by another Brasilian musical genius: Antonio Carlos “Brasileiro” Jobim as espoused by his last—and perhaps, greatest record—the unforgettable Passarim.

The album proffers other beautiful surprises as well. The sequence, “Abril,” from “Seresta Nº9” is another unbelievably challenging piece. Although they are more linear than elliptical, as in “Dança (Martelo) – Bachianas Brasileiras Nº5 II Mov,” the changes in key are no less demanding on a vocalist and orchestra. However, they are handled with passion and grace by Mario Adnet’s sister, Muiza Adnet, whose warm and flexible voice seems heavenly made and eminently equipped to meet these as well as polytonal harmonic inversions of the piece. The other wonderful aspect of this piece is the rhythmic flights of fancy employed by the composer and ultimately the orchestra featuring the masterful caressing and strokes on his myriad percussion by Armando Marçal. Here too is the exquisite work of drummer Jurim Moreira, who embellishes the rattle and hum of his drums with slanted accents so acute that they appear the work of a sublime melodist instead of a percussionist. The exquisite work on the violão by Mario Adnet and that other member of the Adnet dynasty, Antonia Adnet is also a unique feature of this chart.

As with the embellished versions of the suite of suites “Bachianas Brasileiras”—especially “Trenzinho Do Caipira”—and the wonderful study, “Ondulando,” which brings to life the undulating soundscape of the Brasilian sertão, and the elementally melancholic “Tristorosa,” Mr. Adnet displays a masterful grasp of tonal colour and his ability to use the complete range of brass, reeds and woodwinds, as well as strings and percussion; indeed he displays utter mastery of the full orchestra to communicate as in the essential nature of epic poetry. This is a rarity, not only in Brasilian music, but in the whole wide world of music in any age or era. This alone makes Mr. Adnet a force to reckon with musically, in any corner of the world. The extreme elements of the orchestra come together under the sublime command of his baton in “Aria (Cantilena) – Bachianas Brasileiras Nº5 I Mov,” climaxing in the vaunted falsetto of the great Milton Nascimento,” who gives voice not only to the tragic lyric of the Aria in the sublime manner, but also brings to life the passions of the character in the narrative as well. His wordless vocalastics that bring the Aria to a close are utterly brilliant, especially when considered in the surreptitious counterpoint of the baritone saxophone and the trombone. The exquisite nature of the orchestral timbres is further enhanced in “Mazurka Choro” by the wondrous dexterity of violão master Yamandú Costa, who follows a long line of masters emerging from a treasure trove in Brasil.

Paula Santoro is another vocalist of repute who lends her spectacular voice to “Canção De Cristal,” an exquisitely glacial piece from the pen of Mr. Villa-Lobos. Not to be missed is the depth of virtuosity and mastery of the piano of Marcos Nimrichter, another young and emerging musician in the great Brasilian sound scape. “Improviso Nº7 (Melodia)” draws an imaginary line between Mr. Villa-Lobos and that other Brasilian master, the quintessential musical genius, Moacir Santos. It was also Mr. Santos, who saw the inextricable links between horns and strings and also between the dusty, rhythmic beauty of Pernambuco and greater Brasil in much the same manner as Heitor Villa-Lobos did. Only, he lay forgotten, languishing on the West coast of the United States of America until Mr. Adnet and Mark Levine brought the oeuvre of Mr. Santos back into the forefront of the world of music. The classic folklore of northeastern Brasil is further embellished by “Caicó Aria (Cantiga)” vocalised by Mônica Salmaso and the exquisite tenor Edu Lobo. It is only fitting that Mario Adnet should have the honors of being the closing vocalist of the album as also should violão master Yamandú Costa share that privilege. Moreover, this is an aptly chosen piece that typifies the folk elements that made Heitor Villa-Lobos’ music so memorable to legions of fans in Brasil and the rest of the world. Indeed, in the music of Heitor Villa-Lobos, as evinced in the masterful commissions of Mario Adnet can be felt the beauty of the earth, wind and the fire and water of Brasil… wondrous beauty in the timelessness of the elements that are awash in the “Passarim” of Brasil.

Mario Adnet on the web: marioadnet.com