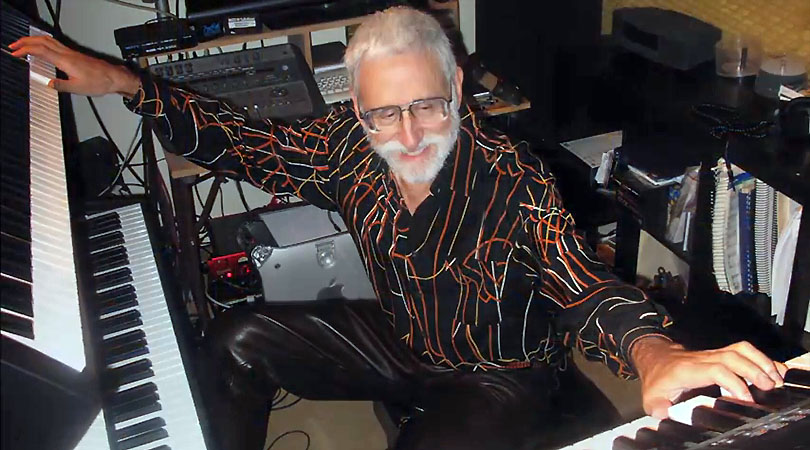 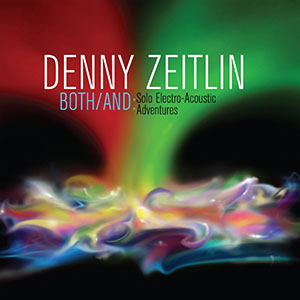 As an artist, Denny Zeitlin can be counted upon to amaze with the virtuosity of his pianism, the ingenious nature of his musical intellect and this enables him to play music of great beauty. But there is something else that Mr. Zeitlin is capable of and does: he leaps off the proverbial ledge into the wondrous musical abyss. He does this because as an artist he likes to risk his life for every note. This is clear from his album, Both/And: Electro-Acoustic Adventures. While there is every chance advanced recording techniques may have been used to preserve these notes on record it seems clear that Mr. Zeitlin has taken dramatic chances with every one of them. In the rapid flurries of notes that sound from the organised, sequential—or otherwise—disturbances of keys on his great banks of synthesisers; or in the majestic arpeggios on his grand piano deeper into the recording the music seems to have come from a spiritual source deep inside the soul of Mr. Zeitlin. And then there are the pointed stabs that he takes at the keys, which cause much dramaturgy in to flavour his compelling writing; and the vaunted poetics of his phraseology resulting in long loping lines that call to mind an art as high as the mightiest arias. Only this is the voice of a pianist who literally lets himself loose around his chosen instrument only to break the confines of all rational musical thought.

This is not to say that the music that ensues is irrational. Rather here is music that defies the mundane aspects of that which appears logical. It is music that thrives on concrete imagery that thrives in an altogether new idiom. What Denny Zeitlin uses in terms of equipment may not be new or novel in and of itself. Experiments with synthesisers have resulted in much music from Chick Corea, Herbie Hancock and even Keith Jarrett; all of whom were deeply influenced—even forced into—when in the employ of Miles Davis during the advent of his so-called electric period. But “Meteorology” on this album approaches the visionary sights as seen, perhaps through the all-knowing eye of a Hubble-inspired telescope. “Dawn” is so far from something that appears on the horizon, when it first begins, only because Mr. Zeitlin pushes so far beyond that vista, by seeming to glorify this natural phenomenon with what sounds first like a guitar, then a bass; then a celeste; then a violin and finally a myriad strings… and suddenly morning has broken in all its glory. “Tiger, Tiger” holds menace for a while; then the shout that is rapid as the rumour of a raid sets off arpeggios and dazzling runs that mimic as closely as is humanly possible for an artist to report on the dissonance of panic. Howling synthesisers recall fleeing prey and the hissing of breath as these are hunted down by a synthesiser in the guise of that majestic animal. “Dystopian Uprising” has the wail of a frightening thought and might easily recall a fiction as real as something Philip K. Dick might have written as androids dream of electric sheep. And as if all this music were destined to prove that Denny Zeitlin could create music as frightening as Elm Street, there is the aching tenderness of “Kathryn’s Song” first played on a magnificent grand piano, then joined in by a “fictional” ensemble in the form of a battery of synthesisers playing “acoustic” bass and a battery of singing and dancing percussion and finally the burnished sound of a horn. And then there is “Charango Dream”: a beautiful and swaggering chart that calls to mind all of the shuffling of dancing feet in an Afro-Cuban dance hall.

But Denny Zeitlin reserves the best of his record for his suite that is written and performed as a homage to the King of Outness himself—Thelonious Monk—with the angular architecture of “Monk-Y Business Revisited.” After a wondrous overture that introduces the main theme with variations to the piece, Mr. Zeitlin launches into the complex and multi-layered music imagined by a series of imitations of small and large ensembles that in turn re-imagine Mr. Monk’s work in a series of musical portraits and landscapes that pay unusual tribute to the rangy elasticity and heroism of the late pianist’s design of his musical oeuvre. There is enough in this suite alone to excite and hold the listener quite breathless as Mr. Zeitlin—in the words of Pliny—“chokes them (the audience) with gold. Best of all, of course is the wistful nature of his pianism on that great grand piano of his, which stands out in this stellar tribute to one of the finest musicians of this—or any—age. All praise of course to Denny Zeitlin, who imagined it all, then transposed it to the myriad keyboards he seems to have mastered on this memorable record.