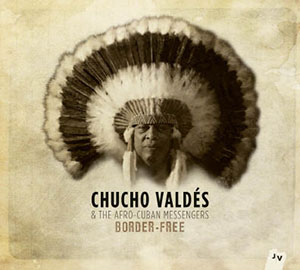 The connotation of the music of Chucho Valdés being Border-Free, from soul to finger-tips, is that idiom and metaphor melt—one into the other—and that lines are blurred; so much so that the imagery and sound of musical topography of continents merge in a singular, beautiful song. In Spanish the title of this record is Sin Fronteras–without frontier, almost as if the sound, the image… and the very narrative of the music has no frontier or boundary. Indeed the music of this album embodies all this and more: in each series of imaginative ensemble or solo playing Mr. Valdés’s music seems to exist outside of time and place. Not only is he picking up and developing it from Chucho’s Steps, but also from this album’s great forebears, Lucumi (Timba, 1975) and Briyumba Palo Congo (Blue Note, 1999)… and, of course, everything he has ever played—especially the wonderful music of Irakere.

The truth is that Chucho Valdés may appear to play music in a fluid, almost unconscious manner, thanks to an unbridled virtuosity. But in actual fact every note is thought out by his quick-thinking, jaguar-like musical intellect. He actually chooses his notes and sequences them in phrases and lines with an exactitude that resembles something between art and science; music and math. It is almost as if the great ancestors of the piano—such as the great Thelonious Monk and the pianist’s own maestro-father, Bebo Valdés came together in the instant the notes of the music were conceived and collided with the lineages of the batá drummers; the rhythm griots of the African continent. And now, it seems, in the music of the entranced drummers and dancers of the First Nations of the Americas as well. Chucho Valdés conceives music as it exists and streams through the cosmos. His piano roars and swirls in great elliptical measures. Then it seems to come to rest again, only to leap from one plane to another, dodging in and out of all three visible dimensions into the spectral realm where all music since as long as memories can discern comes together in a swinging phrase; or a thunderous arpeggio, or in a gloriously hammered fistful of notes. All the time his fingers and hands never seem to leave the keyboard and only rarely does he stop playing as if to give another voice a chance to chant or sing or speak.

The mighty melodic attack of “Conga-Danza” is a challenge not only to the mind’s ear, but also to the heart. Its rhythm unfolds with a spectacular ensemble first sequence, and then roars through a solo piano mid-section, before exploding in a percussion-driven that Mr. Valdés uses to bring the song to a spectacular close with shimmering runs and arpeggios. His monumental chart, “Afro-Comanche” seems to develop out of this narrative into a larger, diaphanous one that embraces the rhythm and hidden culture of the First Nations who settled in Cuba as a result of being banished from traditional lands in the United States. There is a sublime understanding here of pain and how that turned to joy when those Comanche blended into Afro-Cuban culture and this is splendidly echoed in the music of this song. The beautiful and primordial chants and voices of the chorus gives breath to the plaintive invocation to the Santeria pantheon.

There is a broad glimpse into the heart and soul of Chucho Valdés that shows his tender human nature shining through. His achingly elegiac music—from the classic “Caridad Amaro” and the absolutely inimitable music of “Bebo” culminates in the breathtakingly exquisite “Pilar,” a tribute to the lonely stoicism of his mother—is quite beyond beautiful. It is a matchless document to the genius of Mr. Valdés that seems to be absolutely timeless. The sensational harmonics of “Pilar” are graced, in no small measure, by the superb arco work of the young bassist Ángel Gastón Joya Perellada. His outstanding composure, wonderful sense of harmony and complete and rapturous embrace of the melancholic beauty of the song is unprecedented. But the bassist also solos with complete command of structure, melodicism and harmonic brilliance on other charts too, throughout the album. His rhapsodic solo on “Caridad Amaro” is quite unforgettable.

There is another magnificent aspect of the album that echoes throughout the music and that is the absolutely superb percussionists that play in such memorable harmony that they display a quite unique level of empathy with each other as well as with the bass and the lead voice—the piano. This is especially evident on “Conga-Danza,” “Afro-Comanche” and on the brilliantly conceived and Middle-Eastern inflections of “Abdel”. The presence of Branford Marsalis on this chart and his exquisite wailing soprano saxophone solo is most striking. Of course it would be remiss not to acknowledge Mr. Marsalis’ tenor saxophone soli on “Tabú” and “Bebo” as well; nor would it be appropriate not to recognise the mighty harmonics of trumpeter Reinaldo Melián Alvarez. But it is the towering personality and musicianship of Chucho Valdés that gives this record its unique and enduring character for years to come.

Chucho Valdés on the Web: valdeschucho.com