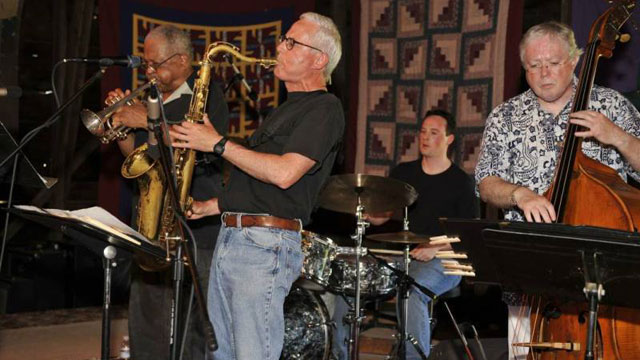 The prospect of the Wallowa Mountains in northeast Oregon can be both brutal and beautiful. Gigantic splinters melded into mountainous rock from Insular Belt, born of basalt flows; slate and quartzite, granite and marble—metamorphism of the sedimentary deposits of the ocean during the Triassic era (of more than 2.5 million years ago)—shoot into the sky almost three thousand meters high. This is where saxophonist Rich Halley hiked with his son, Carson, in 2012. From this odyssey comes the musical footprints of his travels entitled Crossing the Passes. And it is music that is as chipped and angular and as brutal and beautiful as the mountains themselves. The gruff and broad tone of Mr. Halley’s tenor saxophone is perfectly situated to capture the myriad tones of black and gray of the mountains, almost completely bereft of the greens and browns that might dapple the sides of a mountain. Yet the occasional interruption in the lower landscape of fir shooting up gloriously into the air, situated around springs and seeps willows and sedge is captured by equally occasional music that is both magical and mystical, as the smearing and bleating of Michael Vlatkovitch’s trombone encircles Mr. Halley’s brusque tenor yelling and honking as if urging the party of two to soar above tired legs and lungs, to reach the craggy peaks as dark begins to crawl up the rear of their backpacks. 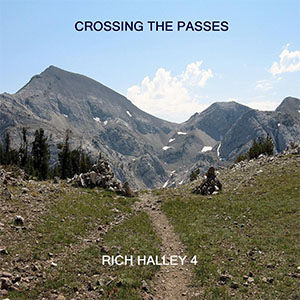 Brass and woodwind nestle cheek-by-jowl as they share the protagonists’ roles with the principal percussionist, Carson Halley, son of the saxophonist. The younger Halley’s playing is informed by a palette that darts in and out of light and shadow as if it was an avuncular sun playing hide-and-go-seek with its playful wards. His sticks rattle the drums and their skins as if they were cracking the glacial terrain of frozen snows of yesteryear. Rumbling bass-drums and tom-toms punch through the air, jolting the tenor saxophone out of its reverie. And like an awakened beast of the slopes the saxophone roars to life skidding down chips moaning as if clawing its way past chips of shale and craggy rock; grumbling dissonantly as if gasping for breath; animated and twisting and turning and tumbling through the air; ascending steadily after descending to collect the other protagonist—the trombone—that continues to rattle and hum its way through the narrow passes carved by the groaning, rumbling bass of Clyde together with the hammer and tongs of the Carson Halley’s drums…Through it all there can be no doubt, however, as to who the leader of this musical expedition is for the enormous aural vortex of Rich Halley’s tenor saxophone seems to cut through granite and marble, carving out the fierce, yet stunning melodies that burst forth from the wide open bell of his saxophone, inviting the equally brazen trombonist to roar in counterpoint as they describe the magnificent edifice of the mountain ranges.

Song titles on this album are as clipped and sometimes elliptical as melodies themselves. “The Only Constant” and “Traversing The Maze” are but two of these. The heraldic trombone is egged on by bass and drums as that woodwind creates the contrapuntal shadow from which emerges Mr. Halley’s saxophone, dry as a bone, yet gloriously a-glimmer…rock-steady at first, then tumbling in cascades of arpeggios and dazzling runs; muttering in triads, over and over again, as if to stress the unceasing nature of melodic movement in the former chart and the beguiling and mesmerising nature of the latter one. Other music is tantalizing and suggestive of the sheer drops and promontories that form the eternal nature of the mountainous architecture. These follow like moving pictures tinted by the sun and the rain in “Acute Angles,” “Basin and Range” and “Rain, Wind And Hail”. A musical magisterium is created as the music forms an endless edifice, carved as if by the wind of the saxophone and the trombone, out of the granite and marble of the mountain. “Journey Across The Land” might sound like a title full of pomp and circumstance but it is a fitting coda for the team descending like musical zealots from the mountain.

Musicians usually shy away from that which is pitiless, but here is a fearless musician in the form of Rich Halley who refuses, like Charles Mingus and Ornette Coleman, refuses to be bullied and frightened off by that which is so. As a result Mr. Halley and the august company he keeps will always come through with music that is unfailingly honest, concrete, magical and therefore absolutely landmarked for posterity.

Track Listing: The Only Constant; Traversing The Maze; Looking West From West; Smooth Curve Of The Bow; The Spring Rains; Duopoly; Crossing The Passes; Basin And Range; Acute Angles; Rain, Wind, And Hail; Journey Across The Land.

Rich Halley on the Web: richhalley.com