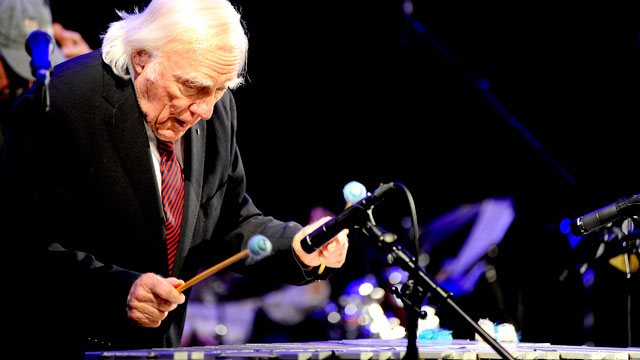 In his introduction to Peter Appleyard and the Jazz Giants: The Lost 1974 Sessions, Appleyard said something that almost anyone in the world of music knew: Benny Goodman’s greatest talent was putting together great bands. The one on this record, which consisted of stellar artists hand-picked by the vibes player for his mystical date in Toronto, Ontario, Canada, was no exception. But then it was also because Appleyard rode his luck that the Goodman band, minus Goodman landed in that great jazz-loving city, that fateful day in 1974. He went on to suggest that it was because of Goodman that this record got made. Perhaps. But It would be remiss if were not affirmed that Peter Appleyard in fact was responsible for this spectacular record. After all he brought the musicians to the Ontario Place Forum, Toronto, where they performed in concert; then realizing that it was not likely he would ever have the pleasure of playing with these musicians, he suggested a recording after the concert. And that, as the saying goes, is how the legend began… One look at the personnel will show why the name of the band is not only most appropriate, but have anyone following the history of contemporary music quite breathless even before a single note was played. The record will also remind aficionados that Toronto was, at one time, a burgeoning venue for the music; something everyone living in and around the city sorely misses. 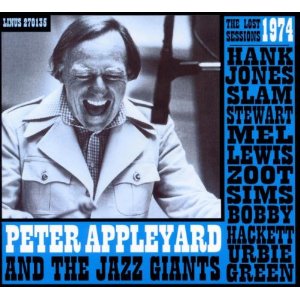 Appleyard’s foresight at producing the record is nothing short of genius. Every musician is at the top of his game. Pianist Hank Jones, featured on nearly song, sparkles like the polished diamond he always was. His ingenious flow of ideas shows, even on the outtakes, which Appleyard has kept throughout the recording. Trombonist Urbie Green growls and sings as he makes the trombone an organic extension of his body. Bobby Hackett’s cornet is ever so hot, almost as if it were pouring out music made of molten brass. Tenor saxophonist heats things up with his sensuous playing only to cool proceedings down with breathtaking leaps and graceful gambols across the musical topography of songs. Bassist Slam Stewart shows off his incredible playing con arco and pizzicato, singing and soloing as his bows through his solo on the classic chart, “Indiana” And Mel Lewis is the master of understated beauty and elegance, adding colour and shading to every chart.

The entire production comes across as a live performance, complete with the chatter and introductions to the songs. Even the false starts are retained. This too is a stroke of genius as it maintains an aura of intimacy with the musicians and the listeners, who—in this case—is like interlopers, eves-dropping on a concert they did not really pay for. The ensemble plays in total communion, creating songs that are all reimagined with sheer genius. Appleyard shows why an impresario such as Benny Goodman hired him. His playing is flawless and has a burnished glow to it. The vibraphone player solos with masterful control and fabulous humour. His lines flow in great arcs seeming to brush against the sky as they loop and flip across the song’s melody. There is also a certain softness to Appleyard’s playing, something he became known for every time he graced a song. It is almost as if he caresses the keys of his vibes instead of hammering them. Appleyard’s best moments are between himself and Hank Jones, whose performance is absolutely stellar.

One of the finest aspects of the recording is that the analogue sound is maintained throughout the digitization process. Toronto’s master recording artist, Phil Sheridan was behind the console at the RCA Studios that 17th day of September, 1974. His sensitivity to the music and the tones and textures of each instrument is magical and he turns out to have a mystical connection with the musicians too. This is something great recording engineers such as Sheridan, and others such as the late Julian Vereker founder of Naim Audio in Salisbury, Wiltshire, England, Rudy van Gelder, in New Jersey, and Gene Paul, who was responsible for the legendary analogue sound of Atlantic Records did for music. Sadly they rarely get the recognition they deserve very much like the music they often recorded. This is what makes Peter Appleyard and the Jazz Giants: The Lost 1974 Sessions a priceless recording for both the true fan of the music and the aficionado of its sound engineering as well.