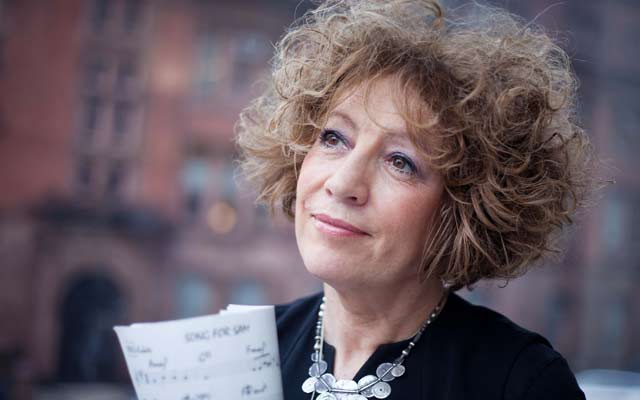 These recordings on Eternal were made in 2013, but their enduring quality touches a chord even two years after Chris McNulty sang them. I savour these songs one by one taking breaks in between. Certainly they are not to be listened to all at once unless you seek as overpowering draught of something like profound and elemental sadness. The split threads of Ms. McNulty’s orchestral nerve-ends are teased so thoroughly and with such interest by orchestra and trio, and the recording engineers that more than several listenings are required to assimilate them. 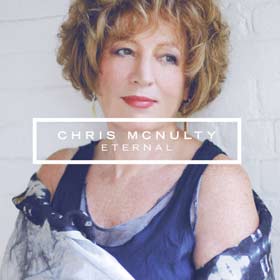 Chris McNulty favours an Expressionist level of detail that casts louring shadows over even the lovesome blue flowers and the green fields of Billy Strayhorn’s otherworldly masterpiece. Her great Puccini moments come one after the other following that – during the Lionel Bart song from Oliver, “Where is Love” and is done with imposing authority as well as conviction: you really feel that loss is crushing your chest as you listen to those rippling piano scales from John Di Martino (what an extraordinary pianist he is). You also hear that in “A Flower is a Lovesome Thing” when Ben Wendel uses just a few bars to weave a magical spell on bassoon. And who can forget Ivan Barenboim’s exquisite break on “Boulevard of Broken Dreams”?

Sometimes Chris McNulty sings from within this Ewartung-like forest of notes, separated only by mystical glissandos—tessitura actually—informed by such magical microtonal separations that you feel completely engulfed by whispering foliage thickened and coloured by elemental lamentation. I feel like an interloper here—in “Nature Boy”—for instance and I shy away instinctively for fear that I might be discovered intruding on the deepest of emotions that can only come from a heartfelt excavation of that spectral soul, that elusive and wondrous spirit that lurks in all of us. Such are the felicitous and sensitively played characters in Ms. McNulty’s dramatic interpretations.

The teasing view of both voice and instruments is spectacularly controlled by the Australian orchestrator and conductor Steve Newcomb. His lovely manner and his extraordinary method of communicating with his players where nothing much is said, but everything that matters is understood is what defines his outstanding performance. And the masterful musicians who pander to Chris McNulty as if they were paying obeisance to a favourite goddess excel themselves both in terms of sheet markings such as pianissimo and fortissimo as well as unabashed swing. IN this regard, Mr. Di Martino gives a glorious account of himself.

The recorded world is full of vocalists who get under your skin extorting tears from the over-the-top manufacture of sorrowful expression, but in the case of Chris McNulty there is something palpable. Even her gentlest of adieus are stretched with regret and impossibly freighted with grief. In the exquisite timbre of her guileless voice you are party to a bouquet of sorrow, as well as catharsis in an almost Grecian sense of the word.

Track List: The Saga of Harrison Crabfeathers; A Flower is a Lovesome Thing; What Are You Doing for the Rest of Your Life; Where is Love; You Are There; Stardust; Nature Boy; Yesterday I heard the Rain; Love Came on Stealthy Fingers; On a Clear Day; With Every Breath I take; Boulevard of Broken Dreams

Since her emergence on the international jazz scene in 1991, NYC based and critically acclaimed Palmetto recording artist, Chris McNulty has been hailed by musicians, peers and critics alike as a jazz vocalist-composer with a unique vision, boundless creative energy and a distinctive style. Blessed with an exquisite instrument she combines a rich, expressive voice with a deep sense of swing, a natural feel for the blues and an impressive ability to improvise. Read more…