When it comes to Cecil Taylor, there is no distinguishing boundary between poetry and music. Both are forged in the same foundry of great art. This is why one facet of Taylor’s art informs the other. This is not unusual for the last of the great musicians who rose to prominence in the 19402, 1950s and 1960s, when music lived in a rarefied realm. And yet The Celebrated Maestro – and I have capitalised that deliberately – also ploughed a lonely farrow since he released his seminal work: Jazz Advance, for ever since then Cecil Taylor has created what can only be described as a parallel musical universe, informed by de poetica and a personal paradigm essayed by him on an instrument he has made his own, which is that his art not only exists in the musical continuum, but is also the very interconnectedness of everything; the beating heart which illumines the inner life of The Artist. 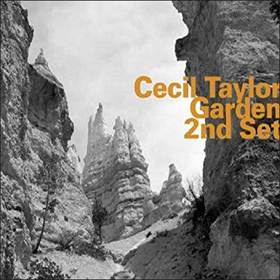 The music of Garden 2nd Set brings to life the sound of my speakers. It seems to have existed in suspended animation and after a prolonged silence between the applause of Garden 1st Set resumed from where Stepping On Stars left off. A fierce energy leaps out of the vaunted opening of Introduction To Z in what suggests a Taylor-like balletic score – it’s an immensely exciting start to a recording that has you on the edge of your seat. Primary colours abound in the music’s orchestral texture and the fast-slow-fast sections of the overture-like start of Garden II keeps the music on a tight rein, with rhythms and phrasing precise and alert. It’s quite a shock to hear such music (at times somewhat familiar to the inner ear) move seamlessly into the rest of the sections of what seems like a visceral dance, foreshadowing the music – especially Pemmican – to come.

One aspect of this score that militates the episodic dramaturgy of five pieces is that each of the five has ample time to develop. Allegro and adagio passages are extended in Garden II and the entire solo repertoire seems to be funded by the very breath of the artist. The digital sound of the great Bösendorfer piano gives a lightness and transparency to the texture, and Cecil Taylor keeps the music moving so that you can easily imagine it being danced to. That’s the hallmark of Taylor’s balletic elegance: playing that’s subtle and individual – ‘chamber music’ on a large scale – and a high level of listening to his inner voice inform the performance. Capture all that in a recording that gives space to the sound, but not too much clouding resonance, and you have a winner.

Cecil Percival Taylor (born in March 25, 1929, in New York City) is an American pianist and poet. Classically trained, Taylor is generally acknowledged as one of the pioneers of free jazz. His music is characterized by an extremely energetic, physical approach, producing complex improvised sounds, frequently involving tone clusters and intricate polyrhythms. His piano technique has been likened to percussion, for example described as “eighty-eight tuned drums” (referring to the number of keys on a standard piano). He has also been described as “like Art Tatum with contemporary-classical leanings”. Read more…