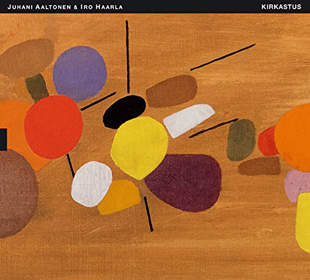 The preternatural silences of the moments before Evening Prayer are broken by the musicians who enunciate the prayer with lines of profound beauty. You will marvel at how the big tenor saxophone tone of Juhani Aaltonen can whisper so softly. You will also be mesmerised by how gently Iro Haarla converses, as if in prayer, with the tenor, her magical, balletic fingers dance on the keyboard with airy grace and charm. And so it continues with subtly different ways through the repertoire as the musicians inform every musical gesture with luminosity and utter splendour. Every note, every phrase and line becomes something so precious to the ear that there is an I irresistible urge to hang on to the sound of each note as it unfurls in the room, then fades and dies to be replaced by its memory. Each musician’s interpretation of the music is grand and spacious, enhancing, if that’s quite the right word, an underlying feeling of statuesque movement where revelations abound. Once drawn in through Evening Prayer, you are beholden to the music through Kirkastus, Nightjar and Farewell to Valomäki, until the programme comes to a close with a soaring interpretation of Psalm 61 – Lead Me to the Rock.

This music although composed by Iro Haarla is close to the heart of Juhani Aaltonen. The saxophonist had a spiritual awakening deep into his musical vocation and spent much time playing in churches and for worship alone until he was coaxed back into the realm of jazz and free improvisation late in the 1990s. Here Aaltonen brings a measure of both his predilections. Both on saxophone and flute Aaltonen plumbs the mysterious depths of sacred music, which is certainly something present in these compositions. His tonal colour basks in sheer colour and variety. Iro Haarla too delights in the spiritualism that the music embraces. Her performance is characterised by the exceptional range of feeling and of refinement in pianism. Both musicians rejoice in urbanity and joyous lyricism. This is a glorious recording. Simply glorious. Even if your shelves are packed with sacred music, Kirkastus is one disc to absolutely die for.

Track List: Evening Prayer; Out of the Depths; Still Waters; Kirkastus; Arie – A Song for a Lost Love; Nightjar; Farewell to Valomäki; Long Sole Sound; Hear Me Cry; Lead Me to the Rock.