At its best, language, that complex, structured system of communication enables us to convey – in an appropriately sophisticated manner – meanings from one entity or group to another through the use of mutually understood signs, symbols, and semiotic rules. But without the sound behind the language it could easily be rendered inert and ultimately sterile. To keep human communication alive and wholly meaningful we rely on enunciation, accenting and phrasing. However, all of this might come to naught without the elemental, primal and spectral dimension so essential to communication – especially when it comes to deep song or profound music such as this repertoire the album entitled Last1 Last2. 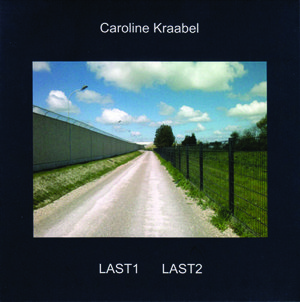 The sound of Caroline Kraabel’s music of Last1 Last2 explores just this aspect of communication. It explores Time that exists at the end of the historic and endless human phenomenon of migration precisely in the moment of lull between loss and gain; transiting between nothing and something. Best of all is the fact that at its heart is a visceral force that comes from releasing the energy of that primal voice – either vocally, prompted by the sound of Robert Wyatt’s voice or by the sound of the breath on woodwinds and brass or (sound that is) released by the action of fingers and hands on strings. Miss Kraabel has provoked expression in two ensembles – a 16-piece one and a quartet – both of which she conducts, directs and plays alto saxophone on “Last2”.

The trigger, Miss Kraabel tells us – is Mr Wyatt’s pre-recorded voice. Direction is, of course, loose and is informed by feelings and reactive impulses to the sound of Mr Wyatt’s voice and the lyric, of course. This, in turn, comes not simply from the musicians existing in the moment, but being able to reach down and get in touch with the primal source of his or her singular emotional response. Remarkably instead of the chaos that this could conceivably produce, the result is an ordered yet intense and often groaning wall of sound, perhaps informed by a monumental physical and psychological event that Miss Kraabel associates with the catastrophic change experienced in human migration.

Although sound is concrete and gloriously palpable it is delivered in a metaphor that exists at the moment of release. For the word “Last” refers to that which has been released in order to inhabit what can only be “First” or what is triggered and therefore sought after the event – “Last”. In one instance (“Last1”) Miss Kraabel has the benefit of a group of musicians who have interiorised the music deeply and respond to it by capturing the poetry of feeling “in the moment”. On “Last2” the smaller group presents an opportunity for unprecedented intimacy. Perhaps the highlight here – and, indeed for the whole disc really – is the presence of Maggie Nicols and the vocalastics she indulges in.

Miss Nicols – a pioneering voice of free improvisation – doesn’t simply sing; what she does is release the feelings of the sound of “Last2” like a depth charge. Her impact on this repertoire is enormous and results not simply from a life spent in free improvisation (historically) but more so (and probably because of how she arrived at that point where she is able to connect with her interior landscape) her impact on this music is a result of her own experience in this realm of feeling and in the expression of these feelings. In a manner of speaking (and without necessarily detracting from the other musicians here) as a woman, she joins Miss Kraabel to bring an unique and importantly feminine dynamic to the expression of the emotions that drive this extraordinary music.