Home Music The Pete McGuinness Jazz Band: Along for the Ride

We know that it takes a very unique – even special – vision for a musician to imagine, conceive and execute music on the very large canvas of the big band. But we know that Pete McGuinness is that musician who has, fortuitously, been endowed with not simply with that ability, but who possesses the gifts that go with it in spades. He has proved this time and time again. Along for the Ride – a title that somewhat self-deprecatingly suggests it was the musicians who performed on it had everything to do with its success tells only part of that story. In reality it is clear that Mr McGuinness was the clever – even hugely intuitive – leader who helmed this recording to fruition. 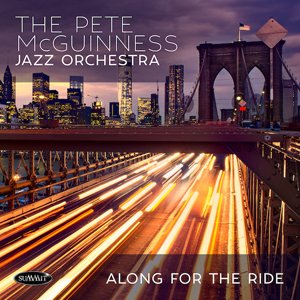 This choice of repertoire is not the only inspired aspect of this recording. There is also the fact that it is presented in remarkable and refreshing fashion. Mr McGuinness shows – or has shown – that he is a fine composer. His grasp of melody goes beyond the merely prettiness of things sonic. His songs have nary a wrong note; not just one of them, but this is true song after song. Listening to each – “old Roads”, for instance; or “Point of Departure” – you get a sense that each black dot is exactly right – its intervallic value, temperament and so on is perfectly sought out and presented. Moreover, when each of these “black dots” is strung together, phrases are not simply logical, but expressed in an unusual and breathtaking manner. And so the black dots fly off the page as if they were given wings.

There is, of course, more much more. Mr McGuinness not only understands or is inspired by the music of others; indeed this music speaks to him in a personal manner. The result is that even when the song is recognisable by its title, it still sounds like nothing you might have heard before. Who would have thought, for instance, that “Put on a Happy Face” would be rendered in a bittersweet manner, which, as it turns out, is part waltz-time and part swinging? While the form of these other pieces is not like that one, “Nat Adderley’s “Jive Samba” which is delivered with fair and elegant frolic; and George Gershwin’s “Who Cares”, the youthful abandon of which was once gracefully expressed by the fictional American President, his wife and an ensemble on Broadway. All of these are dispatched with a sense of wonder and surprise.

The Pete McGuinness Jazz Orchestra also comprises musicians not only with excellent reading skills, but features musicians who have clearly interiorised this music and play with idiomatic grace and eloquence. Soli have been generously distributed and each one is sensitively and imaginatively performed. Pianist Mike Holober – himself no stranger to the rigors and joys of big band performance – seems to carry a heavier load here and plays clearly enjoys his own stepping out into the limelight. His soli are extremely tasteful and like the rest of the music, not a single note is out of place.

Mr McGuinness also shows himself to be a fine vocalist and yet again shines as an expressive countertenor. His phrasing suggests that he is in fact much more than merely a vocaliser. His take on Michel Legrand’s “You Must Believe in Spring” is exquisite. For this reason and all of those mentioned elsewhere this is an essential recording for everyone who would like to enjoy fine music over and over again.