While John Coltrane boasted the now legendary “Classic Quartet”, Julian “Cannonball” Adderley boasted a “Classic Quintet” and this is it. Some may say that the truly classic one featured Louis Hayes on drums, but… At any rate a finer Cannonball quintet was hard to come by. Certainly the great alto saxophonist hardly got the fame that he was due largely because he came hot too long after Bird, but his work with Miles – especially on the iconic Kind of Blue (Columbia, 1959) – where Mr Adderley was showcased with his virtuoso playing alongside John Coltrane proved him to be a force of nature. And once he was joined by his brother Nat Adderley on cornet, Joe Zawinul on piano, Victor Gaskin on bass and Roy McCurdy on drums (or Louis Hayes, as the case may be) Julian “Cannonball” Adderley began to write his own legend.

Fortuitously these tapes made at the Penthouse Jazz Club in Seattle came to the attention of Über-Jazz-Fan and super-sleuth, Zev Feldman of Resonance Records, who brought it to his Canadian doppelgänger Cory Weeds in 2016. And a new imprint Reel to Real Recordings was born. This immaculate recording became the first release from this new label. The importance of this release cannot be understated. With the rapid rise of the Jazz Faculty in colleges and universities and the clone-like production-line population of graduates that keep being thrown into the world of music we seem to have come to live in a Jazz Age fraught with extreme dilettantism where the utter disregard for “ancestry” and the importance of the musical continuum is rife. And so the mere sound of this kind of music introduced in the velvet baritone of The Man – Cannonball Adderley – himself is a heady experience. And then there are the musicians and the music they play… 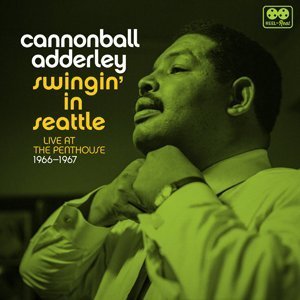 Mr Adderley was one of the most influential musicians in his day. Moreover he was a fierce intellect with an unrivalled knowledge of American music (not just Jazz), and those factors combined with the cold fire of his playing – often in the bluest part of the flame made him a unique voice that often had even ‘Trane catching his breath. His playing, particularly on “Somewhere”, with its gentle vibrato closing out the ends of phrases in which the (absent) lyric soars heavenward is nothing short of hair-raising. And it is here that one experiences the “vocal” nature of his playing that made him a class apart. Moreover, his feel for Brasilian music and its rhythms was flawless and he displays this with sublime elegance on guitarist and songwriter Luiz Bonfá and lyricist Antônio Maria’s “Manhã de Carnaval”. These only serve to give a fleeting glimpse of the true import of Mr Adderley’s genius. The rest of it is served up on the extraordinary music that filled two edifying sets at the Penthouse.

Mr Adderley began to fulfill his true potential and his musicianship began to flower in no small measure because of his brother and musical soulmate, cornetist Nat Adderley, who plays perfect foil to the alto saxophonist’s mighty solo flights into the stratosphere. The cornetist’s own expeditions are woven into his brother’s like the swirling double-helix of the DNA molecule. It is this that makes the experience of this music utterly unforgettable. The pianist Joe Zawinul had only just begun to make waves as a composer by the time he joined Mr Adderley’s quintet. His playing here is full of light and shadow and shimmers with genius and mystery. His contribution “78 Miles Away” reflects just this.

Mr Zawinul stayed and blossomed with this classic Cannonball Adderley Quintet for nine years which ended in 1969-1970. During this period he contributing several compositions to the Adderley bandbook – among them such classic hits as “Mercy, Mercy, Mercy”, “Walk Tall” and “Country Preacher” — and ultimately he even helped to steer the group into the electronic era. However while with Mr Adderley, Zawinul evolved from a pianist whose playing bristled with leaping boppish grooves into a soulful performer heavily steeped in the blues, before ultimately finding his way into the explorations ad loud arena of rock via a huge arsenal of electric and electronic keyboards, which is what attracted Miles Davis into hiring for his seminal “electric period”. On his playing of the repertoire on Swingin’ in Seattle – in solo or ensemble – the pianist shows why he became quite indispensable.

The glue of the music which kept the rhythmic spine of the quintet together is defined by the fiery percussion colouring of Roy McCurdy, who together with Victor Gaskin also stays right in the pocket whilst the soloists take off and ascend into the rarefied realm with mighty solos throughout the performance. The rhythmic duo is right there when the soloists return and this is what makes them compelling to the music of this quintet. It is difficult to imagine this music without the virtuosity and time of both Mr Gaskin and Mr McCurdy’s playing. In fact, it’s difficult to imagine that a more exciting hour and a quarter could have been served up by the owners of the Penthouse Jazz Club and you will hear this right at the end of Nat Adderley’s buttery bleating and ferocious roaring at the end of the second set before Cannonball brings the music to a close.