Home Music Bill Frisell: Music IS
Somehow there is always an ethereal hush that swathes the music of Bill Frisell, even when he is playing in an ensemble. How much more pronounced then is the echo of this quintessential element of Mr. Frisell’s playing on Music IS? Many artists play solo often. On stage they are bathed in soft light and they often spend time in the studio with just the engineer, who is, of course, in another booth, separated by sound-proof glass. But somehow you get the feeling that it is different with Mr. Frisell. His music – certainly these sixteen tunes on Music IS – is at once uniquely quiet and noisy, as pregnant with sound as it is with silence. But there is more – much more; his silences are sacred spaces resonant with creation. Each note appears to ping into existence from the proverbial cosmic void. 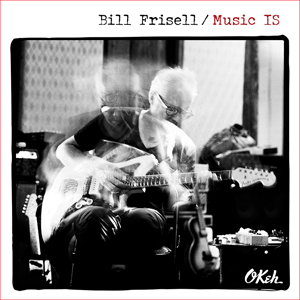 To say that the music of Mr. Frisell is unique is stating the obvious. But it is a truism as well. In his playing – whether on guitars or ukulele – and in his manipulations of electronic devices here you hear the sound of notes – some stubbornly short and stabbing, others elongated seemingly stretched forever – each a something echoed from nothing; each something absolute naked and pure radiating not from a musical instrument at all, but like a corona emerging from the nuclear furnace of the sun. Meanwhile alone and surrounded by guitars, amplifiers, cables and other devices Mr. Frisell dishes out everything like a master-chef. Melody, magical harmony and rhythm is present in all places yet attached nowhere.

Music IS is an album full of glinting lights, mysterious depths, expectations, frustrations, doubts and hopes, like the shattered shadow of a rhapsodic quasi-Mendelssohnian scherzo glimpsed by moonlight in a forest. In sheer colour and variety, in the depth of its characterization and the exceptional range and refinement of musicianship, Mr. Frisell here imparts a power and monumental stature to music – not simply played on the guitar, but any music – which no amount of bigness (the usual route taken by many guitarists) can achieve. And the variety and stylishness of his enterprising music is effortless, seductive and enormously lyrical.

From “Pretty Stars” to “Rambler” Mr. Frisell enacts his singular musical dialectic, between emptiness and structure. Both facets of this music keeps opening us to the moment, which accepts and transforms everything – every note, every slur, every pregnant pause – and every note that is plucked out of a string or two or three, ascends into the air pirouettes and then falls as these moments turns into somethings of rare ecstasy. Listening to this music is being alive in the moment, and a healing process unspoiled by the separation of mind and ear and absolutely and wondrously something that belongs to Bill Frisell. And because he seems to will it, it is now ours as well. Which is why Music IS is an album to die for…