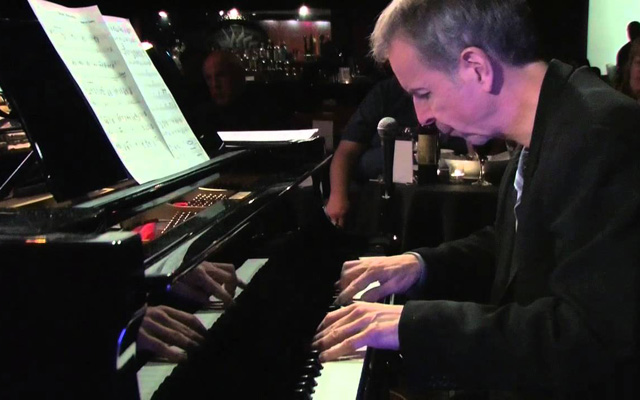 For any musician, one who came after the 17th century that is, to master the music of Johann Sebastian Bach, is surely be the crowning achievement of a worthwhile scholarship. After all, how else could one be said to have “honed” his craft if one has not mastered with mathematical precision, the formal problems of counterpoint? Not that producing music in which as many as five separate lines of argument running simultaneously would be demanded of such a person. Nor would it be asked that the music be of the deepest humanity, not overly dramatic, but just as pure and abstract as the artistic depiction of human endevour could be; for then would be such a joy so unique that one could have been said to have made a journey of complete and extraordinary transformation.; a deeply moving experience.

One man seems to have done this time and time again on numerous occasions, in studio performances, clubs and concert stages, with ensembles small and large. And Bill Cunliffe has done it yet again, this time, honouring The Master himself with BACHanalia featuring numerous lead voices – including his own, in a veritable tour de force lasting a little over an hour. Already Bill Cunliffe is one of a handful of writers and pianists whose musicianship is held in such high esteem that one might say others venerate him and his work. To be precise, In the last two hundred years, only Claus Ogerman (1930-2016), Lalo Schifrin (1930- ) 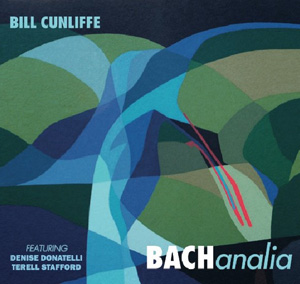 and Kuno Schmid (1955- ) may really be spoken of in the same breath as Bill Cunliffe although all of those men might blush at being spoken of as such. The proof is there so hear – the latest being BACHanalia from Bill Cunliffe.

In its grand scheme of things melodic, harmonic and rhythmic, it honours Bach’s cantatas, keyboard and orchestral work either by re-presenting individual works or works in combination with one another in a modern setting. The disc also pops out a surprise piece: Prokofiev’s “3rd Piano Concerto”. No human has produced a greater version than the legendary Martha Argerich who “owns” it. But Mr Cunliffe certainly exploits the full length (and breadth) of the piano’s sonorities. It is a version that employs a crisp hard touch for its more rhythmic motorised prelude yet there are no qualms about using pedal to add colour and warmth. Speeds might be slow, but the shape and direction of the piece under Cunliffe’s pianism and direction. The incredible Canadian drummer, Joe La Barbera is a boon companion throughout this quite extraordinary recording.

Joe La Barbera is a one of Bill Cunliffe’s finest assets on BACHanalia. Known for his extreme literacy across musical languages and styles, Mr La Barbera is unleashed on the Prokofiev and just as fulsomely on “The Three-Cornered Hat” a work by Manuel de Falla; another one of the “sur-prizes” on the album. Another secret weapon, however, is Denise Donatelli a vocalist with a silken soprano. Miss Donatelli is swift to make an impact on “Sleepers Wake”. In fact where her approach emphasises the way strands of polyphony move in and out of each other like living organisms and she achieves an exquisite musical coherence without recourse to stylistic idiosyncrasies. Her luminous voice also lights up Carl Phillippe Emanuel Bach’s “Solfeggeitto” (naturally), “The Three-Cornered Hat” and “I’ve Got You Under My Skin”, on the latter of which she sings the lyrics and not just the elaborate wordless fantasia as she does in the Bach and the De Falla.

Bill Cunliffe also enlists other instrumental masters to make the music bloom. Among them is Bob McChesney whose trombone soli are gleaming gems on “Sleepers Wake” and the other Bach, “Goldberg Contraption”, celebrated in addition with an irreverent title. Bob Sheppard on soprano saxophone is another, as is Terell Stafford, a woefully underrated trumpeter who literally melts the melody of “Blame It On My Youth”; and there’s also Larry Koonse, a guitarist who just keeps popping up everywhere that great music is played, like on BACHanalia for instance…