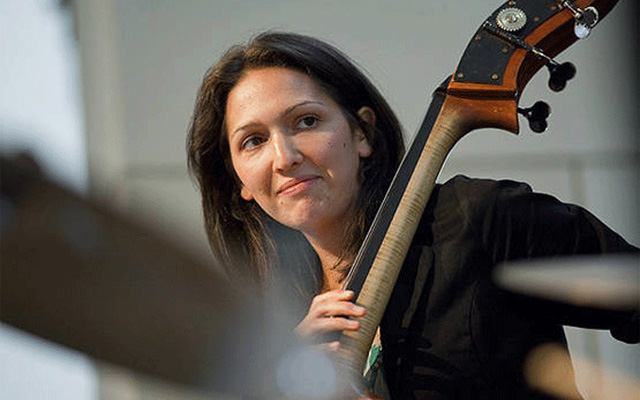 Katie Thiroux really knows how to make an entrance. Choosing a metaphor to suggest she’ll follow no one, she kicks off Off Beat making a velvet-toned statement alongside the spectacularly garrulous clarinet of Ken Peplowski and Roger Neumann’s yammering soprano saxophone. You would think that the translucent gravitas of the bass would be somewhat lost in the chatter of winds and reeds, but this will never be; at least not while Katie Thiroux is at the helm of affairs. Already a recognisably better-sounding record than her previous forays on Capri Records, Katie Thiroux is naturally emboldened to take the kind of chances one would not normally take this early in a contrabass-playing career.

Off Beat is a more contemplative record and despite the connotation of its title it finds Katie Thiroux taking risks that might be hard to see/hear at first. Miss Thiroux is, after all, made very much in the image and likeness of the same melody-loving school that produced the great Ray Brown. However, by slowing down the tempo and lowering the pitch considerably – a ritual throwing away of the metronome, so to speak – Katie Thiroux shines an old-fashioned arc-light on the keenly visceral 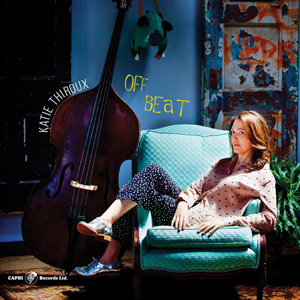 and full-frontal physicality of her instrument. Naturally this would include herself as well, because the contrabass and Katie Thiroux are joined at the proverbial hip. Her melodic dalliances – from “Slow Dance with Me” to “Willow Weep for Me” are infinitely sexier and she wears that persona exceedingly well and to the hilt.

And so reflected in the gleaming varnish of her magnificent instrument is a Katie Thiroux who’s all grown up and has graduated from prom-night to the suggestively-lit ballroom floor, cutting the rug while catching the light on every sensational curve that she and her music is made of. “Slow Dance with Me” is just one example of this. “When the Lights Are Low” is another and “Some Cats Know” is another…and so on. Through it all you can’t help but look at the beckoning pirouettes and the breathtaking leaps of body and soul, lump in the throat de rigueur as Miss Thiroux dances from corner to corner. On “Ray’s Idea” her partner is Justin Kauflin, but not too long ago it was the sinuous Ken Peplowski, on “Brotherhood of Man”, who taps Mr Kauflin on the shoulder again for a dance on “Some Cats Know”. The allure is mighty irresistible.

Katie Thiroux is in demand. Everyone else in the band wants to waltz with her; Roger Neumann, who’ll trade his soprano saxophone for a tenor saxophone on “Happy Reunion” and, of course, Matt Witek is always waiting in the wings, and he keeps time just as good as anyone within earshot. But there’s always Ken Peplowski, who swings by again on “When the Wind Was Green” bringing his licorice stick to captivate the bassist again. With the lights dimming slowly there is funky and blue sadness in the air and “Willow Weep for Me” brings the curtain down reminding one that there’s no telling what another episode of this kind of captivating dance marathon with Katie Thiroux will bring. Oh, but for good measure there is this: This girl can also sing…