Charlie Parker and Steve Lacy have inadvertently cast gigantic shadows on both the instruments that Benjamin Boone just happens to play. The former, an alto saxophonist is, quite simply, one of the greatest musicians that ever lived; so great, in fact, that when listening to his inventions we often forget that it was Adolphe Sax, who, in fact, gave him the instrument on which to invent. And Steve Lacy took Sidney Bechet’s “straight horn” and completely re-wrote its musical canon. Mr Boone, coming all these years after the two giants who once walked the earth, would almost naturally be overshadowed. There is, however, another way to explain the importance of Benjamin Boone, who is in many ways a kind of Franz Schubert figure, and like Schubert who, in his day, was similarly dwarfed by Beethoven and Mozart.

Like Schubert, the famously productive and legendary master of Lieder in whose lucid and songful music, melody was king, Mr Boone seems to have arrived at a point in his career as a composer where he is inadvertently becoming more Schubert-like. Three of Mr Boone’s last four recordings have featured poetry. But that’s not all; with these three albums – Benjamin Boone | Philip Levine: The Poetry of Jazz Volume 1, Benjamin Boone | Philip Levine: The Poetry of Jazz Volume 2 and now The Poets are Gathering [all on the Origin Records imprint] Mr Boone is beginning to display an ability to match music to poetry so closely that the words seem to have been written expressly for this purpose.

Mr Boone is turning into a great songwriter. This 2020 release The Poets are Gathering is forcing us to recognise this fact. But that does not appear to be the limit of his achievement. His work with on Joy with The Ghana Jazz Collective mark him down as an artist of the first order and, more significantly, is also shedding new light on his instrumental abilities. While he may still inhabit – somewhat diffidently at times – the shadows of the great alto and soprano saxophonists, Mr Boone is also beginning to assert his quite original voice on both the instruments. These are horns of a higher register and Mr Boone’s music – often dominated by a succession of seraphic melodies – plays both the instruments in the thrall of deep emotion.

This is, of course, well suited to the music he writes for himself and his various ensembles. His music is never facile and his performances thrill likewise. As with everything he composes, the pieces here are highly melodic, and between the Ghanaian excursion and the one with the poets, ranges in emotion from capricious gaiety to deep melancholy, marking [the music of both albums] as some of the finest you will have the pleasure of listening to in a very long time. 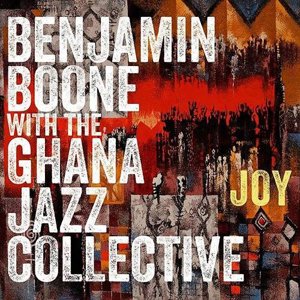 Benjamin Boone with The Ghana Jazz Collective: Joy Despite the fact that much has been stressed about the “African” origin of Black American music; the fact that it was pivotal in shaping The Blues and the Jazz that followed, one cannot help being in unabashed awe at the breathtaking beauty of these Ghanaian musicians who engage in a kind of deeply osmotic relationship with Benjamin Boone throughout this repertoire, which goes back and forth – as Charles Mingus might have said “Osmotin’” and reverse-osmotin’ to deliver music that seems to come as if from the nuclear corona of the very sun itself

It is here that Mr Boone’s virtuoso instrumentalism shines – whether he is playing the alto horn or the soprano one. Everywhere his playing is marked by finely judged balance and exquisite melodic colour, best shown… well, everywhere, really… where a beguiling attention to detail on the part of Mr Boone, but also especially with the musicians of The Ghana Jazz Collective, creates a chamber-like intimacy. The performances by the Ghanaian musicians are particularly vivacious. Keyboards-player Victor Dey Jr., bassist Bright Osei and drummer Frank Kissi are refreshingly instinctive, at once lyrical and rhythmically dynamic. Tenor saxophonist Bernard Ayisa plays with quicksilver instinct for this music and Sandra Huson adds a sunny drama the three charts on which she appears. 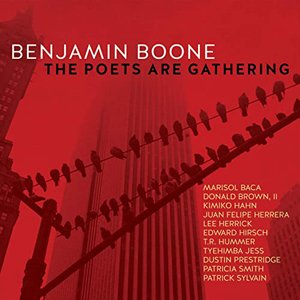 Benjamin Boone: The Poets are Gathering This mighty record reinforces the reputation of Benjamin Boone as a great songwriter who can take the lyricism of poetry and make it his own in melodies that are singularly poignant and powerful. Much of this work is socially relevant and politically conscious – in keeping with the dark times that have beset the USA from 2016 onwards. Themes of both music and poetry are stark and matching the themes and content of the verse are appropriately dark hued melodies.

Mr Boone works with various ensembles, mixing instrumentation with intuitive ingenuity. The questing, sometimes painful themes are counterbalanced by instrumental arrangements that feed into the intense yearning of the poet’s voices. Dominant ideas are introduced shadowed by sweeping melodic and harmonic accompaniments throughout and this gives the sixteen works here a profound orchestral heft. Bright light and dark shadows abound. Mr Boone’s playing follows the settings by ringing in the changes in emotion to mirror despair and hope, using colour and texture to mirror the palette of emotions with his musical palette; in each exuberant yowl of the soprano horn and each grim shadowy phrase wail on his alto saxophone.

What is also quite amazing and worthy of note is just how much poetry there is on this recording. Each of the poets brings an unique voice to this project. Juan Felipe Herrera surely deserves special mention not only because he has the honour of delivering the title poem, but because his wonderfully crafted voice comes into its own as he produces some of the most dramatically spontaneous recitation on the disc. His poem and the music that surrounds it serve to highlight the veracity of the entire project – as well as give notice of Benjamin Boone as an important, visionary new voice in a world where the art of poetry and music collide.