When Don Cherry inadvertently coined the term “world music” the great Swedish musician and drummer, Bengt Berger was right there with him in a manner of speaking. Brought up on a staple of Jazz, Mr. Berger sojourned to India to learn Hindustani and Carnatic music in the late 1960’s before going to Ghana and living among the Ewe peoples in the 1970’s. Mr. Berger rapidly learned Ewe drumming in Legon, a suburb of the Ghanaian city Accra, from various drummers and later principally under the Ewe master Doe Kushiator. Later Mr. Berger fell under the spell of Kakraba Lobi his xylophone teacher from the north. Kakraba Lobi, a Lo-Birifor xylophone wizard, was the first musician to be enrolled at the Institute for African Studies, (University of Ghana). Mr. Berger studied with Kakraba Lobi in Accra also touring the Ghanian north to visit and perform with various great xylophonists.

This album, Praise Drumming, was first released four years later after hugely successful tours of Europe and India for the 1984 edition of Jazz Yatra, perhaps the first biennial world-music festivals which, sadly, folded up a few years later after its founder Niranjan Jhaveri died. Today the term that Don Cherry coined may have become something of a cliché but there are still a few musicians who hold its tenets close to the heart as they continue to roam the earth’s vast musical topography. Bengt Berger remains one of the greatest visionaries among 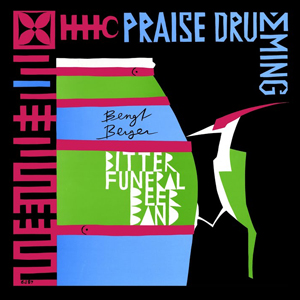 that small tribe of maverick musicians, a peripatetic percussion colourist and composer whose art seems to launch itself from some distant musical shore before washing up on a new Swedish beachhead, pounded into the cultural microcosm of folklore that emerged from among mists of the 1st century proto-Indo-European Suebi peoples.

Praise Drumming reverses the musical orientation of Bengt Berger as he looks at the circle of life from the Ghanian lens with music refracted through his Swedish one. This results in eight works featuring beautifully crafted arrangements of beguiling variety and sensuousness in every lovingly caressed melodic, harmonic and percussive phrase. Funerary musical devices and motifs played on a breathtaking array of percussion instruments by every member of the ensemble, most of who also double on western brass, reeds and woodwind, stringed instruments. Bittersweet music conjures the staging of “the funeral” complete with ululating vocalastics from Anita Livstrand as the rest of the musicians seem to launch the imaginary body in its bier to Valhalla but not before the music becomes part of a natural landscape that mixes beauty and danger, and the sounds of birds and animals with the spirit-world of ghostly familiars, exquisitely sculpted from the sound of saxophone and flute.

The long, floating lines of Thomas Gustafson’s flute and soprano saxophone entwined with Miss Livstrand’s voice mark the ethereal beauty of “Two Ewe Songs” while the long, sustained inventions of Björn Hellström’s flute and Bengt Ernryd’s flugelhorn bring the rich narratives to life in the undulating folk melody of “Upper Region”. The tragic assassination of Sweden’s Olaf Palme is forever frozen in time as the shots that cut him down are breathtakingly evoked in the visceral percussion of “Pire for Palme”. The traditional lament in “Dar-Kpen” echoes in the resonant thunder of the Ghanian (xylophone) Ko-Gyil and the Amadinda played by Bengt Berger and Miss Livstrand. Fittingly, the album comes through a roaring close with “Praise Drumming for ANC” a tribute to the African National Congress and the people of South Africa, who were fighting for freedom at the time when this hugely powerful album was first recorded by what is easily one of the great ensembles in any music.