Home Music Elisabeth Engdahl & Thomas Gustafsson: Ori Variations
Of all the current doyens of modern (church) organ performance Elisabeth Engdahl knows no limits to her explorations. This is the evidence from the Ori Variations disc that was released on the Country & Eastern label in Sweden. It is a dazzling recital performed on the beautiful instrument at the Church of Fässberg, Mölndal, Gothenburg of original music made infinitely more compelling by the presence on the disc of soprano saxophonist Thomas Gustafsson. The music is held aloft by the six movements or variations, the sound of each of which is majestically accentuated in the hushed echoes of the church. If one’s reflexive default at the prospect of an organ recording – even one as exquisitely curated as this one by Mr. Gustafsson himself – is one of dispassionate or nonchalant resistance, this recording is as likely to turn ears as any made.

Along the way, in a deftly balanced presentation of strikingly contrasting essays, Miss Engdahl offers beautifully turned, reflective and buoyant readings of sui generis “concert” works. “Variation 1”, with its exquisite musette-like opening, whose subsequent movement trips along in a manner organists seem reluctant to pursue, is simply a pearl. Each of the other five variations – though never wholly sacred or profane – is still sweetly devotional in nature, skillfully preparing the way for the highly distilled and contemplative a subsequent variation to follow. As ever, the seasoned reflective qualities possessed by Miss Engdahl and Mr. Gustafsson, heard to such memorable effect in “Variation 4”, are reawakened again in the stunningly voiced tones of “Variations 5 and 6”. 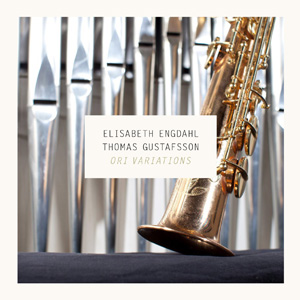 In the final variation we are provided with a sense of the “numinous” (a word coined by the German theologian Rudolf Otto, no less): the experience of awe, of the transcendent majesty, energy, and almost incredibly also the mystery of the wholly “other”.

Great instrument aside, this is largely down to the judicious alchemy of Miss Engdahl’s perception of how tonal architecture and local colour can collide to mesmerizing effect, especially when melded inextricably with the elementally keening soprano saxophone of Mr. Gustafsson. “Variation 6” is a case in point: the glistening parallel motion over the pedal midway, often a bloated gesture, enticingly holds back to set up the rich-textured gravitas that follows. Inexorable momentum here is born of fervent authority, a virtuosity of combined effects without gratuitous excess. Also one need not be reminded that the temptation to a proliferation of contrapuntal wizardry, especially as one is improvising on a baroque instrument together with a texturally different instrument, can often be a serious pitfall. But there is none of this here.

Instead one is beguiled by the gorgeously intertwining lines with their supra-polyphonic interpolations never obfuscating the essence of the fragrantly atmospheric idea in the ingeniously compressed lines of the execution. But it is the gripping drama and involvement of each instrument with the other that captivates most of all in both forward momentum and intensity, complete with the almost hypnotic abandon. The truly symphonic in grandeur these Ori Variations harnessed impressively by two exceptional musicians also makes for an exceptional Bachian tribute, if you wish to perceive this disc in the dimension of its homage to Bach’s unsurpassed technique. However, it is well-nigh impossible to forget that in the granite-like blocks of intensely chiseled harmonic progressions of the Ori Variations lies an indelible proof of the absolute artistry of two fine musicians.