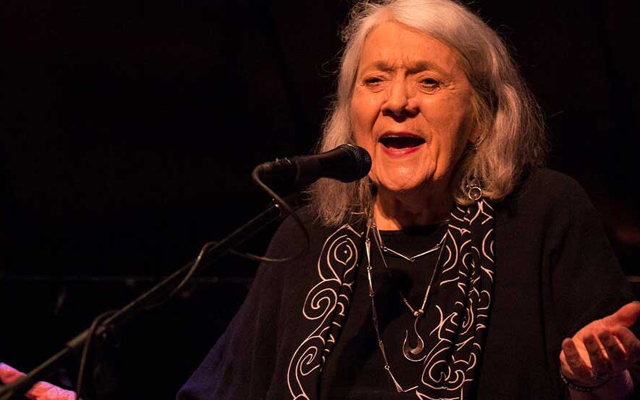 Art would never survive the ravages of history with its storytellers; the ancient and modern griots descended from a long line of West African ancestors. It is those men and women who stoke the elemental fire of The Blues and (thus) of Jazz. The gilded voices of the sharecroppers, born of slaves and freemen, the quilters and in rare – very rare – instances indeed in the voices of the spiritually-connected, whose skin was bleached, not burned by the sun. Such a rarity is Barbara Dane, a woman in a minority of one today. Exuding both the pain and the joy of the blues as she did when she caught the ear of Louis Armstrong who when he first heard her sing, was moved to exclaim in Time magazine in 1959: “Did you get that chick? She’s a gasser!” That was followed up by Armstrong inviting Dane to appear with him on national television, and on the Timex All-Star Jazz Show hosted by Jackie Gleason on January 7, 1959. 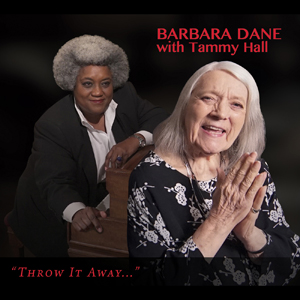 Barbara Dane began her Blues ‘ministry’ ten years earlier – from San Francisco to New Orleans – and she performed with other legends such as George Lewis, Kid Ory, Memphis Slim, Willie Dixon, and Muddy Waters among others. Today, Barbara Dane has only Sheila Jordan to keep her company in keeping the ancestral flame of Blues and Jazz alive. Nina Simone has long-since passed, as has Abbey Lincoln. But Dane and Jordan are still around; and like Jordan, Barbara Dane shows no sign of slowing down. She is 90 years old and in August of 2016 she released Throw It Away a glorious recording that now has her travelling across America to promote the album. The album title takes its name from a magical “meditation on life” by Abbey Lincoln. In Dane’s version of the song, its protagonist is caught in a swell of emotions as if in a silent, emotional frieze as it pours out of her sun setting life.

There is, seemingly, no letting up in the dramatic tension of the music that picks up from Leonard Cohen’s “Slow” and the elaborate tautness virtually explodes in Dane’s unspeakably profound take on “America Tune” written, it would appear, for just for the achingly expressive version of the Paul Simon song. Magically, Barbara Dane can also make as if the music of the Beatles (“In My Life”) is as deep as Memphis Minnie’s blues. It comes as no surprise that her take on Mose Allison’s iconic tune “My Brain” is delivered with the stab of a knife followed by the proverbial turning of that blade in the wounded organ. Best of all – and mostly as if re-opening the elemental wounds of blues – Barbara Dane delivers her coup de grâce with “Blues Over Bodega” using her voice (rather than Lu Watters’ trumpet) to, as she herself puts it, “blow down the (atomic energy plant) project just like Joshua blew down the walls of Jericho” and then to tear your heart out with a fabulous version of Razaf and Waller’s “How Can You Face Me?”

Throw It Away is music – not just Blues and Jazz – at its finest. The aching beauty of the musical arrows aimed at the heart by Barbara Dane has everything to do with that but there is much more. Like the magical, soulful arrangements and pianism of Tammy Hall, kept steadily palpitating by bassist Ruth Davies – an extraordinary melodist in her own right – and by a glorious percussion colourist, Bill Maginnis. Richard Hadlock’s lonesome wail on soprano saxophone is transformative on Duke Ellington’s “All Too Soon”, already immortalized by Dane and Carl Sigman’s lyric. Not surprisingly, the most heartfelt performances come from Dane’s wonderful musician-son, Pablo Menéndez, whose blues harp performances on “Blues Over Bodega”, “King Salmon Blues” and “Tell Me How Long Blues” make a strong case for his being anointed as the successor to the great Sonny Terry. Of course, it is Barbara Dane’s magical art that will forever define the greatness of this disc.

Track List: Sellin’ My Porkchops; Slow; Throw It Away; American Tune; Blues over Bodega; Kugelsburg Bank; King Salmon Blues; All Too Soon; Tell Me How Long Blues; How Can You Face Me? In My Life; What Kind of Country? My Brain.